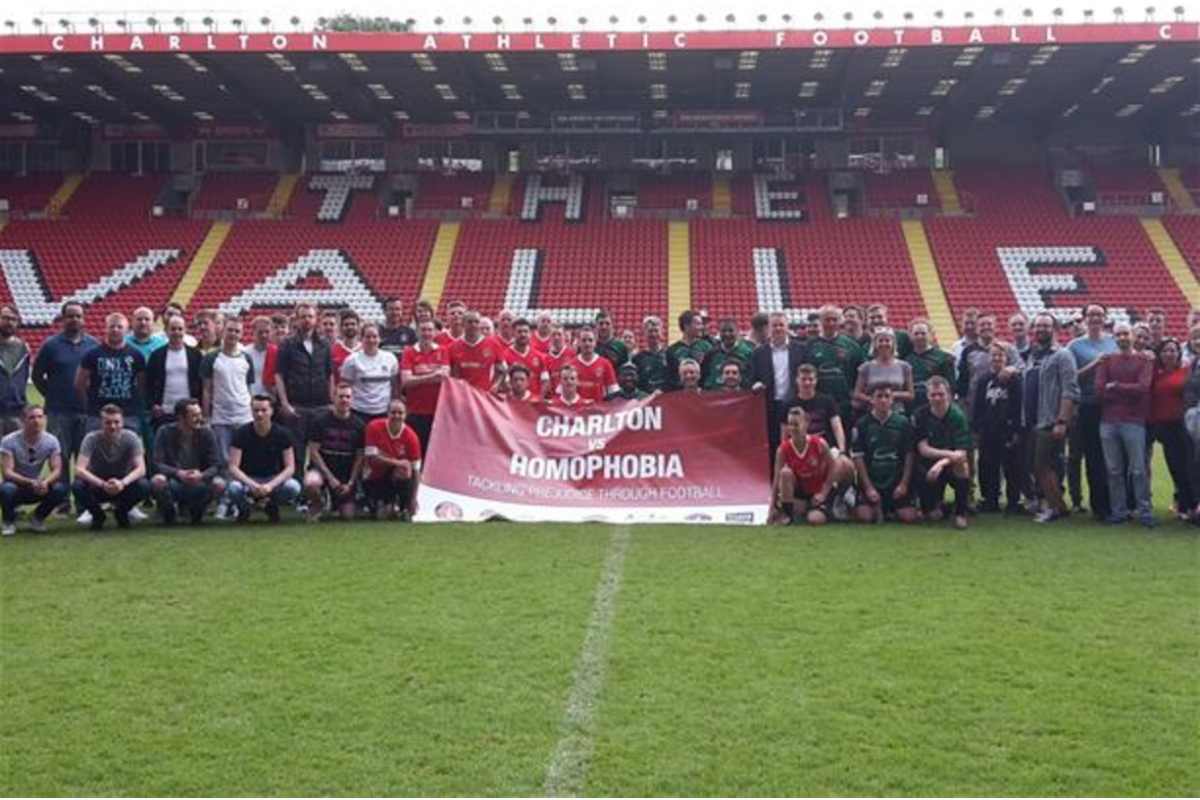 Charlton Athletic, in association with the Proud Valiants, will host the second annual Charlton v Homophobia football tournament at The Valley to help raise the profile of LGBTQI+ football.

This year’s event will take place on Sunday, May 7th with four LGBTQI+ friendly teams taking part in a round-robin 11-a-side tournament. The first three teams will see the return of the same sides that competed at last year’s inaugural event, which was won by the University of Greenwich:

A mystery fourth team will be announced in due course.

This year’s tournament will again be supported by the Charlton Athletic Community Trust (CACT), the University of Greenwich, Kick it Out, Fans for Diversity and Football v Homophobia.

CACT deliver a wide range of programmes designed to promote equality and tackle discrimination, including issues relating to identity, gender and prejudice.

Tickets for the event are free and should be booked in advance at: https://www.eventbrite.co.uk/o/proud-valiants-charlton-athletic-fc-13349815112

Charlton Club Development Manager Lisa Squires said: “As a club, we know there is no place for homophobia in football and it is something we have been very proactive on. We’ve worked closely with the Proud Valiants since they came into existence in 2015 and earlier this season we dedicated a league match to fighting homophobia.

“Last year’s Charlton v Homophobia event was fantastic and it was great, but not surprising, to see the club’s fans respond so positively to it. We’re looking forward to this year’s event and welcome any Charlton fans that would like to play their part in the day.”

Chairperson of the the Proud Valiants Rob Harris said: “We are so pleased to be working for a second year with Charlton on this amazing event. Charlton was a huge force in the Kick It Out Campaign on Racism and they are now a leader in fighting against intolerance against fans who identify as part of the LGBTQI+ community.

“There’s obviously a huge difference between race and sexuality in terms of visibility, however abusive behaviour still affects everyone. This challenge of ensuring zero tolerance of homophobia is the responsibility of everybody in football, from the boardrooms to governing bodies, from the dressing rooms to the fans and stewards.

“It is provided in educating people about what is and isn’t acceptable behaviour and language. This tournament is not just about making a stance against homophobia but a celebration of diversity and shows that Charlton insist football should unite everybody.”

Bexley Invicta player/manager Gary Ginnaw said: “The 2016 tournament was special in its own right because it was the inaugural event. It was a huge success and a proud day for everyone concerned.

“The 2017 Charlton v Homophobia Tournament is the culmination of this hard work and is set to be bigger and better than the first event.

“It’s been an exciting year for Bexley Invicta FC and the club are on course for their most successful season to date. The Charlton v Homophobia Tournament will be the perfect way to end a momentous season. Everyone at the club is delighted to be involved again this year and we can’t wait to step out onto that famous Valley turf once more.”

CACT Head of Equality, Diversity and Inclusion, Dr Michael Seeraj said: “The inaugural event held last year was an incredible success. Tackling discrimination, in relation to the LGBTQI+ community, is currently high on both the football and wider sports agenda.

“We are very proud to have led the way in tackling racism in football, and are very keen to build on this, and to share our knowledge and experience with our LGBTQI+ partners, as part of our wider equality and inclusion programme. We are also delighted to be working alongside the CARE Partnership, who have a long history of promoting equality and tackling discrimination.

“The Partners involved did a fantastic job last year, and this event will now form part of our annual community programme - and can only go from strength to strength.”

“It is as a community of friends and allies, regardless of sexual orientation or gender identity, that we can make a stand against homophobia in all walks of life.”