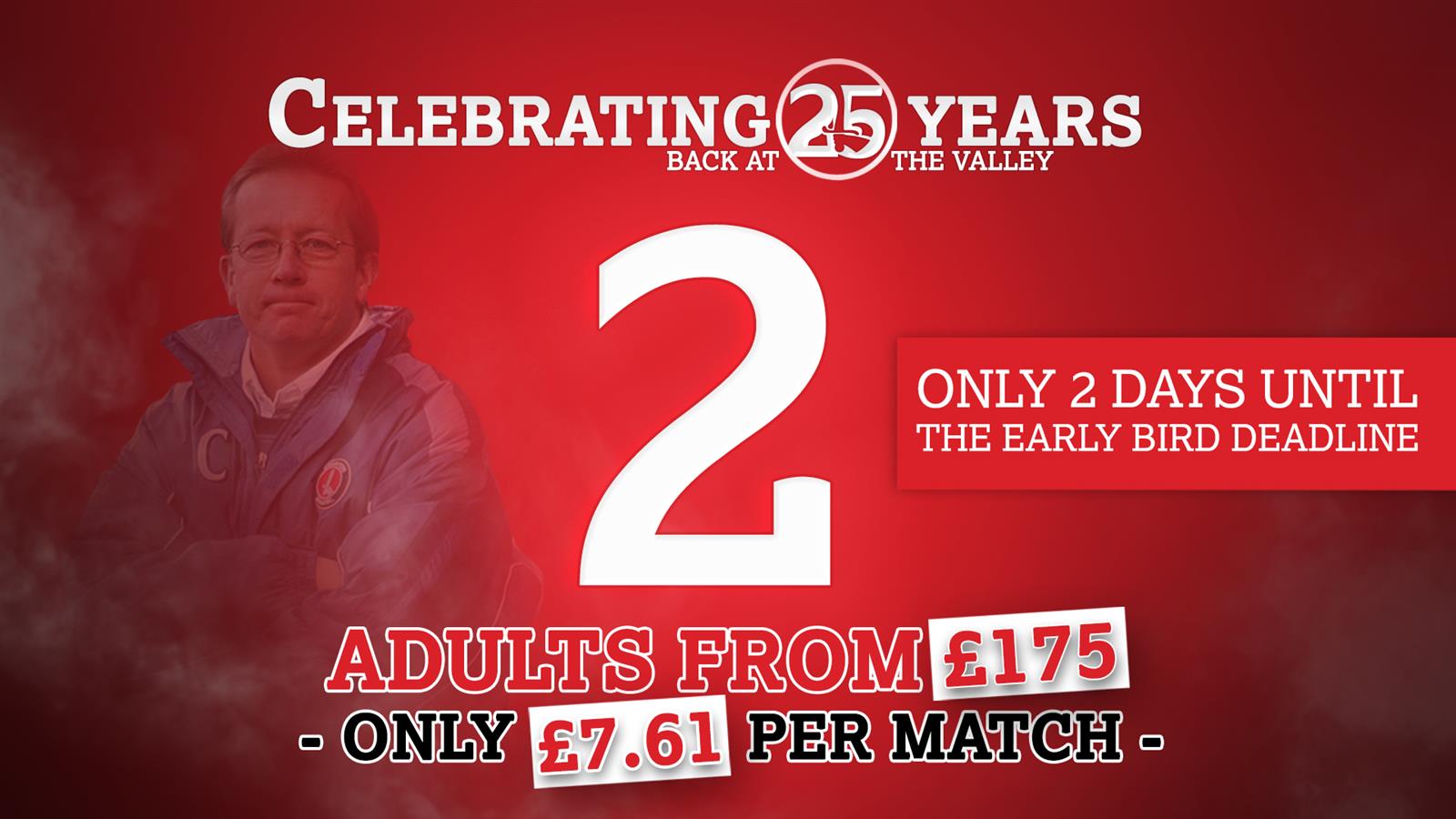 There are just two days remaining until the early-bird deadline for 2017/18 season tickets.

As part of its new website, the club will be launching an all-new, premium video service and supporters who renew or purchase their season ticket by Sunday, April 30th will receive a free, six-month subscription to it.

Over recent days, teaser content for the new platform has been released, which has showcased a snippet of what can be expected on it, beginning with a short clip from Johnnie Jackson’s feature-length ‘Valley Stories’ interview.

In his clip, the former boss discusses the beginning of our iconic play-off final victory against Sunderland in May 1998, while in his full interview he talks about the entirety of his time in south east London, both as a player and Manager.

Curbishley’s full interview will be available to watch in full when Valley Pass launches on July 1st.

As they did last season, adult season ticket prices begin at £175 - equating to just £7.61 per league match, making it the second cheapest season ticket available anywhere in the EFL.

Please see below for full details on how to renew or purchase your season ticket for our 2017/18 season, as we look to achieve promotion back to the Sky Bet Championship.

For next season, we have reduced the number of zones inside The Valley from seven to five. We have done this to simplify the map for supporters and staff and to ensure a fairer pricing plan for fans sitting in similar areas.

Where possible, we have ensured that season ticket prices have either stayed the same or have been reduced. However, due to the changes in zones, there are a small number of blocks that have seen a slight increase.

Two blocks at the ends of the East and West Stands will be closed in 2017/18. We hope that we will be able to enhance the atmosphere in SE7 by having supporters closer together. In the event of a busy matchday, these blocks will be reopened so that The Valley can house as many Addicks as possible.

There are five ways for supporters to purchase or renew their season tickets.
• In person – Supporters can visit The Valley Superstore between 9.30am and 5pm Monday-Friday, between 10am-1pm on non-matchday Saturdays and, in the West Stand’s main ticket office, from 10am onwards on home matchdays.
• By phone – The ticket office’s phone lines are open 9am-5pm on Mondays, Tuesdays, Wednesdays and Fridays, 9am-1pm on Thursdays and 10am-1pm on non-matchday Saturdays.
• Online – Fans can purchase or renew their season ticket at https://booking.cafc.co.uk/ 24 hours a day, seven days a week.
• By post – You can return your completed application form to The Valley, Floyd Road, London, SE7 8BL
• By finance - Our four-month and 10-month finance options are again available. Please see below for full details.

The club will continue to honour all senior concessions season ticket holders who are renewing that were affected by price changes in the 2014/15 season.

Supporters will again be able to spread their Season Ticket payments across four or 10 months, thanks to credit provider V12 Finance.