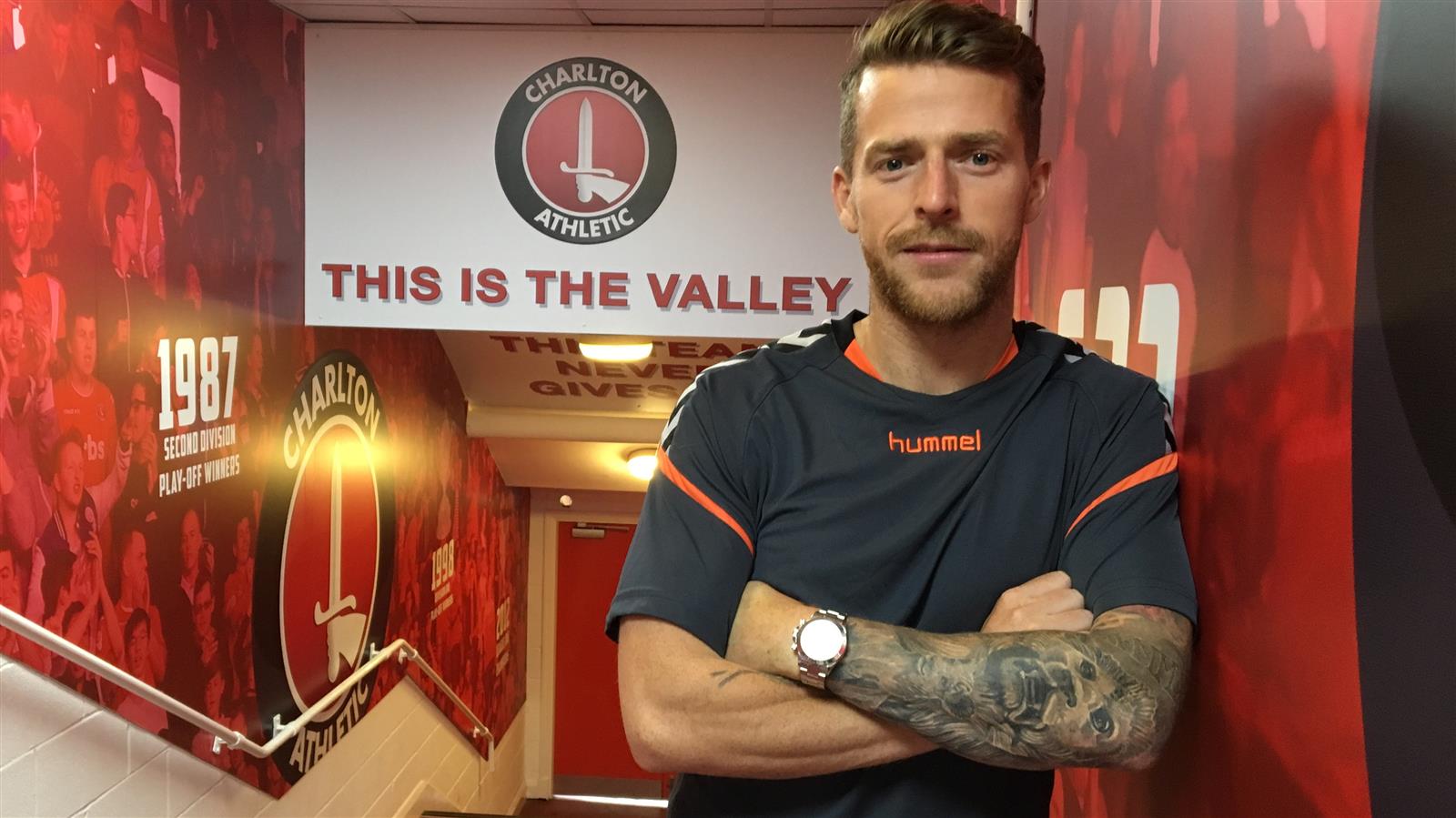 The Addicks manager tried to sign Clarke while he was still at MK Dons and since then has been frustrated as the attacking midfielder continued to score against Robinson’s sides, most recently at the start of last season when Clarke found the net in a 2-1 win for Bradford at Stadium:mk.

The 29-year-old, who spoke with charm and intelligence in his first interview as a Charlton player, grinned: “Hopefully I score whenever he’s in the stadium! I’ve spoken to him (Karl) a few times. Before I signed for Bradford, I spoke to him and his philosophy is the same as it was back then. I’m just excited to get back in and to work with him.”

Clarke was at Bradford for three seasons and spoke fondly of his time at Valley Parade, which ended in heartbreak just a few weeks ago after losing in the League One play-off final at Wembley. The father of two is determined to help his new team to the Championship.

He said: “Having come so close to promotion in the previous season with Bradford, my goal is to go one step further this year and achieve it. A club like Charlton should be pushing for promotion and getting a club of this size into the Championship is what I want to do.”

Football has always been in Clarke’s life. When asked about his early memories he recalled playing football at school. He and a friend, who was also very good at football, used to take on and beat as many as 12 of their schoolmates in the playground and he hasn’t lost that youthful enthusiasm for the sport.

He explained: “I played football when I was really young, as soon as I could walk really. Being from Ireland I played a lot of Gaelic football and hurling, just sports in general.

“I picked up football early and progressed from there. I started getting trials with teams in England from 13 or 14. Football was one of the only things I was really good at.”

That skill, initially honed on the playground, led him to England and Ipswich Town. He played an important role in the Blackpool side that got promoted to the Premier League in 2009-10 but his favourite moment to date remains Bradford’s famous 4-2 FA Cup fourth round victory away to Chelsea.

Again with a smile, he said: “We scored just before half time and went on to beat them 4-2. I was injured just beforehand and that was my first game back and I came on for the last 10. To be involved in that game was unbelievable, really. No-one gave us a chance especially at 2-0 down.”

Clarke comes to Charlton after a successful season in the playmaker role at Bradford. Only one player in the division averaged more key passes per game last season. There is a modesty to Clarke, which came across even when asked to explain his strengths.

He said: “I am a number 10 to start with, I can play up front. I like to get on the ball and link the play. I try and score my fair share and assist as many as I can and just cause problems for defenders and midfielders. I’m hopeful I’ll excite people and do well.

“I like to get into pockets of space where I would say I’m quite intelligent and technical. Hopefully everyone will see that.”

His move to Charlton was done quickly after that play-off final loss. “I’d been away for my sister’s wedding and it was getting sorted in that time,” Clarke explained. “To get it (the transfer) done before I go away on holiday is great. I can start my pre-pre-season work and I’m really looking forward to coming back in.

“I never asked to leave Bradford. When a club like Charlton come and offer for you then it’s a very difficult decision that I had to make. I loved my time at Bradford. All the fans were great for me, hopefully I can have the same impact and same relationship with the fans that I had there.

“We want to have a good go at getting out of the league.”