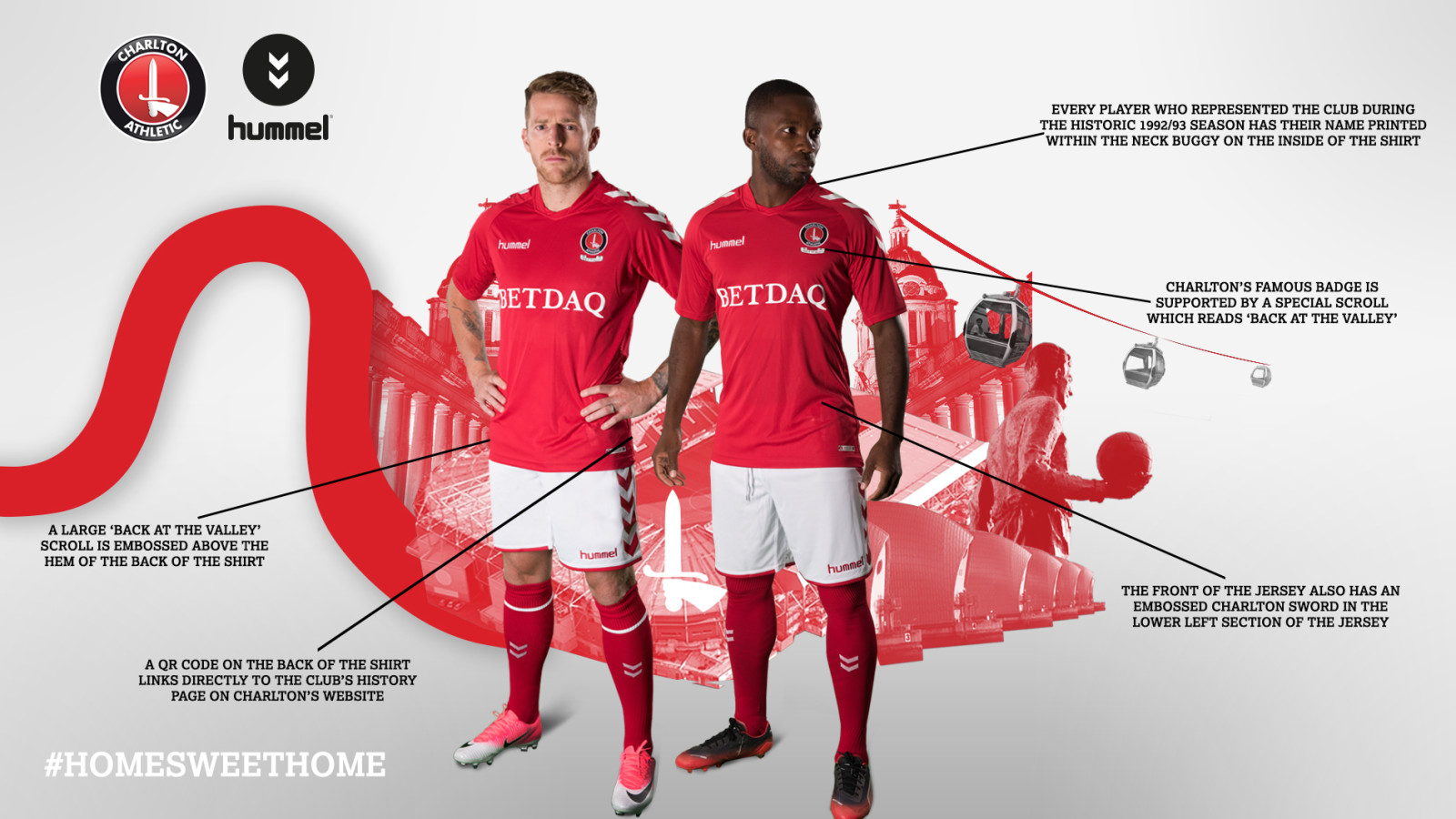 Charlton’s brand new, bespoke home kit for the 2017/18 season, designed with the help of supporters, has been revealed.

The red home jersey, the first created by the club’s new kit manufacturer hummel, features distinctive white chevrons on the sleeves, and a sports fit, vented neckline and includes a number of details which pay tribute to the Addicks’ 25-year anniversary since returning to The Valley.

As well as every player who represented the club during the historic 1992/93 season having their names printed within the neck buggy on the inside of the shirt, Charlton’s famous badge is supported by a special scroll which reads ‘Back at The Valley’, identical to that which was seen on the front of the shirt when the club returned to SE7 against Portsmouth on December 5th, 1992.

The front of the jersey also has an embossed Charlton sword in the lower left section of the jersey. The replica jersey contains a larger ‘Back at The Valley’ scroll emboss above the hem of the shirt. The replica home kit will also include a QR code which will link directly to the club’s history page on Charlton’s brand new website giving fans instant access to all the important moments in the Addicks’ history.

The kit is completed with white shorts that, for the first time in five years, are once again trimmed in red and again features the iconic hummel chevrons in red. The strip is finished off with red socks with a white trim and hummel detailing.

As a thank you to those supporters who were involved with the consultation for the new home kit, they were invited, along with competition winners, to a special event at The Valley on Thursday evening which allowed them to be the first to see what they had helped to create.

As part of the event, they were able to wear the shirt for the first time and join summer arrivals Billy Clarke and Mark Marshall in a photoshoot for the official reveal.

Tom Sinclair, Sport Market Manager for hummel UK and Ireland: “Charlton Athletic is a club with a proud history and it was very important for us to keep that at the forefront when designing the club’s kits for next season.

“The input we received in our consultation with Charlton fans was vital and we’re very pleased with the kits the first team, academy, Community Trust and Women’s team will be wearing for 2017/18.”

Charlton CEO Katrien Meire added: “The new kit looks fantastic and pays tribute to Charlton’s proud history. We’re grateful to hummel for putting in the time and effort to make sure the kit and the little details in it are relevant to the club.”

The 2017/18 season is the first year of a new five-year partnership between Charlton and hummel that sees the Danish kit manufacturer provide kit for the club’s first team. The club’s new deal has been negotiated to incorporate the award-winning Charlton Athletic Community Trust (CACT) and Charlton’s women’s team, as part of the deal the two organisations will be gifted kit to match the first team and further align the Charlton family.

The women’s team were represented at yesterday’s photoshoot by Kim Dixson and Grace Coombs. Charlton Athletic women’s chairman Stephen King said: “We’re very pleased to be wearing the new red kit this season. It’s a lovely kit and the fact we’re all in it shows the unity of the Charlton family.”

Later this year, a limited edition, 25th anniversary kit will be launched which will be worn only once in the league game against Portsmouth on December 9th.

This kit will replicate more closely the strip worn 25 years ago and will also carry additional detailing paying homage to that day back in 1992.

This very special anniversary shirt will be made available for fans to purchase as a limited edition and will be revealed in more detail later in the year.

As part of the partnership, hummel and Charlton will create and give away a total of 1,125 kits to 75 local primary schools, including all 48 schools in the club’s Schools Partnership Scheme. This supports the club’s broader strategy to drive the awareness of Charlton with young Greenwich residents to support the growth of the club’s fanbase.

Guests at yesterday’s event also received information about the new leisure and teamwear that will be available at the new Valley Superstore which opens to the public both online and at The Valley next week.

The new 2017/18 home kit will be available for purchase from the new Valley Superstore from Saturday, August 5th when the Addicks kick-off the new season against Bristol Rovers.