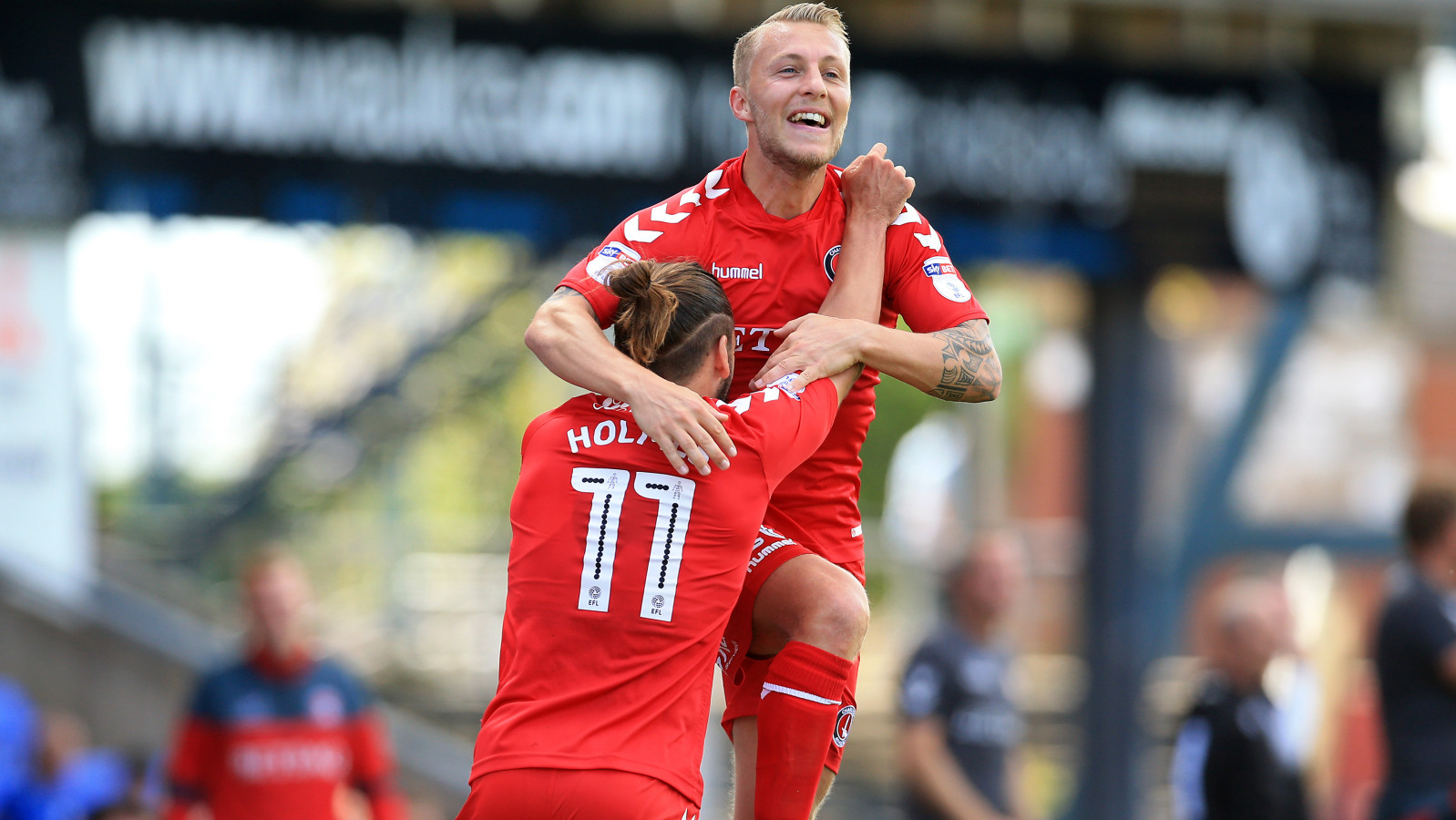 Charlton edged a topsy-turvy game to run-out 4-3 victors away to Oldham Athletic and secure a fourth league win of this young season.

Deadline day signing Joe Dodoo scored on his debut with Billy Clarke and Tariqe Fosu also netting but the goal of the game was a wonderstrike by Ricky Holmes.

The away side played some wonderful passing football in the first half hour of the game and played the last 35 minutes against 10 men but had a nervy finish against a battling Oldham team that didn’t give up.

With international call-ups and new signings impacting the two teams, it was a slightly messy start with Charlton playing the better of the football.

However, the Charlton fans had their hearts in their mouths when Oldham had a fourth minute penalty appeal turned down. Pearce slipped chasing a long ball but won the ball back fairly off new signing Eoin Doyle according to the referee Ross Joyce.

After that early scare the visitors really got into their stride. Holmes had a seventh minute shot blocked after a nice turn from Karlan Ahearne-Grant. Shortly afterwards Solly found space on the right wing and fed Holmes who teed up Clarke, his goalbound shot was blocked behind from a corner.

In the 13th minute Charlton had another real chance, again Solly fed the ball in from the right, it came to both Fosu then Holmes but their respective efforts were blocked and then went wide. Moments later Ahearne-Grant had a shot well blocked after Fosu found him.

The chances were coming with regularity and in the 17th minute Fosu did brilliantly to win the ball just inside the Oldham half. He broke well and played in Ahearne-Grant who timed his run perfectly. The striker hit straight at Wilson with an Oldham defender on his back and the Oldham keeper just held on.

Charlton took an 18th minute lead through a Holmes arrow into the top corner from what must have been more than 30 yards out. It was a lead Charlton deserved and came following a neat one-two the winger played with Ahmed Kashi. He then beat his man with a touch ahead of himself and smashed in with a fantastic right-footed strike straight into the top corner of Wilson’s goal for an early contender for goal of the season.

In the 22nd minute Charlton doubled their lead. Jake Forster-Caskey picked up the ball on the right wing after some good work by Billy Clarke. The midfielder faked a pass inside and beat his man running down the line. He then cut back onto his preferred left-foot but his cross was a little deep for Bauer who left it after an apparent call from Fosu. From the summer signing from Reading produced a lovely step-over before knocking it inside his defender onto his right foot and smashing home from just outside the six-yard box for his first goal for Charlton.

With Charlton dominating Oldham made a change bringing off Ollie Banks and subbing on Ousmane Fane and adjusting to more direct tactics. The midfielder made an immediate impact getting booked minutes after coming on for a foul on Forster-Caskey.

Davies pulled a goal back for the home side against the run of play with a penalty in the 34th minute after the referee pointed to the spot suggesting there had been a foul in the box following an Oldham corner.

Just before half time time, Davies curled an effort from the edge of the box and Amos saved brilliantly to tip it around the post. From the resulting corner the ball fell to Fane whose shot was headed off the line by Clarke to ensure Charlton went into half-time with the lead.

Oldham levelled in the 51st minute when Doyle capitalised on a mix-up in communication between Pearce and Bauer. The two went for the same header and the ball sat-up nicely for Doyle, who got in behind them, to hammer home a simple opportunity.

The game changed again in the 54th minute when Fane was sent off for a second bookable offence, this time for a studs-up foul on Solly.

Charlton made the advantage count and took the lead again in the 62nd minute. Clarke broke well into the Oldham area and was tackled, where the ball came out to Fosu. The winger drew in three defenders and laid back to Clarke who passed the ball calmly into the bottom corner from nine yards.

Dodoo gave Charlton a 4-2 lead when he cool capitalised on an unfortunate flick from Oldham’s Gardner. The debutant still had work to do when he collected the ball 40 yards out from goal but he controlled calmly, moved forward with pace away from the Oldham defenders and slotted home past an onrushing Wilson. The goal was the fourth time in the young striker’s career that he has scored on debut.

In the 82nd minute Dodoo had a great opportunity to double his goal tally when Fosu found him on the counter-attack. This time Wilson was out quick enough and smothered the striker’s goal bound attempt.

The Latics went up the other end and Jack Byrne collected a Doyle pass in space on the edge of the area and fired into the bottom corner of Amos’ goal to make it 4-3 to give Charlton a nervy last 10 minutes.

The Addicks held on for the three points and with Wigan not playing moved up to third in the table.