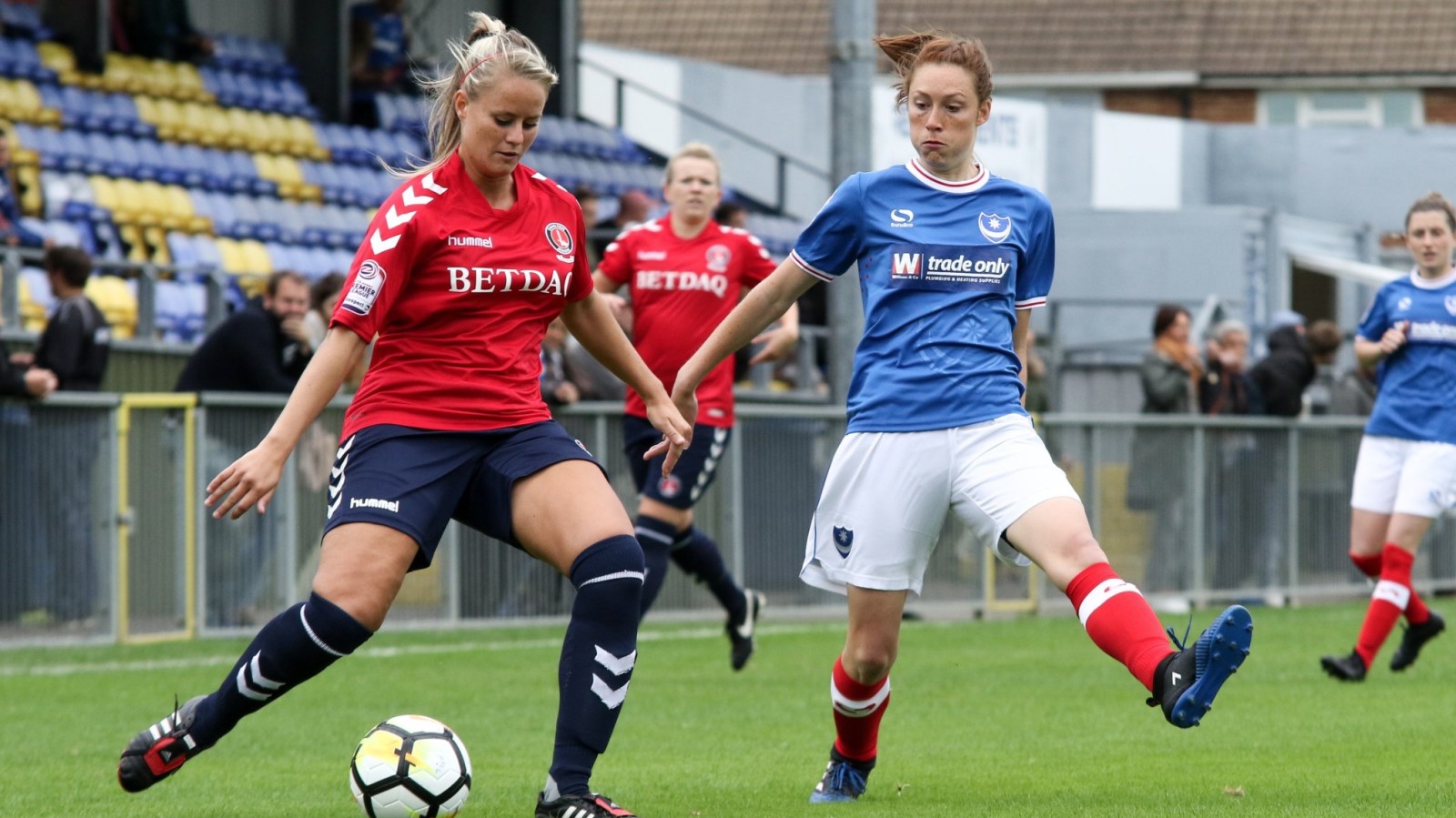 And they had to do it the hard way, after centre back Grace Coombs was shown a red card just six minutes into the tie after a high tackle on a Portsmouth defender in the penalty area. The resultant penalty was well saved by Katie Startup.

It was almost all one-way traffic, with Pompey having plenty of chances, but in the end it was substitute Graham who, as so many times before, had the final say, pouncing on a mistake in the Portsmouth defence before rounding keeper Michelle Beazley and slamming past two covering defenders.

As predicted, it was the women’s team’s toughest fixture of the season thus far – and in stark contrast to last weekend’s 11-0 thrashing against Swindon Town.

The South Coast side gave Charlton’s defence their most thorough examination – and they came through it with flying colours thanks to a resilient performance.

It started in the worst possible way, when Pompey came forward and in the midst of a scramble for the ball in the penalty area, Coombs was adjudged to have fouled Shannon Albuery when attempting to clear the danger. The card-happy referee decided to give the defender her marching orders after pointing to the spot.

Molly Clark stepped up but her effort from 12 yards was at a comfortable height for Startup, who saved well and smothered the ball before anyone could get to the rebound.

From then on Pompey tried their best to make their player advantage count. Startup, though, was excellent, collecting pretty much every cross the visitors swung her way.

The keeper, who heads off with England under 19s for a training camp this week, made a stunning save just after the half hour mark to deny Albuery when she looked destined to score, standing up tall and tipping over the bar.

Clark came closest for the Hampshire side on the stroke of half time, with a speculative long-range effort that slammed against the post.

Charlton’s chances in the first period were few, but Charlottes Gurr and Lee, as well as winger Ellie Dorey, all went close.

After regrouping during the interval, the visitors came out with more purpose and caused Portsmouth’s defence few more problems. Lee was millimetres away from breaking the deadlock with an hour played when she glanced a Gurr corner narrowly over the bar.

Again Pompey had most of the possession, but their chances were hard to come by in the face of resolute defending.

In fact it was Charlton and sub Graham who had the ball in the back of the net first, but the striker’s beautiful curling effort was ruled out for offside.

The second time Graham had the ball in the net, though, it most certainly did count. She was alert to notice a poor pass in the Pompey defence and retrieve possession before taking the ball past Michelle Beazley and firing home past two defenders.

Although that goal came in the 94th minute, Charlton still had three minutes to hold on after, but were never really in any danger and the victory keeps them in second place, behind Crystal Palace only on goal difference.