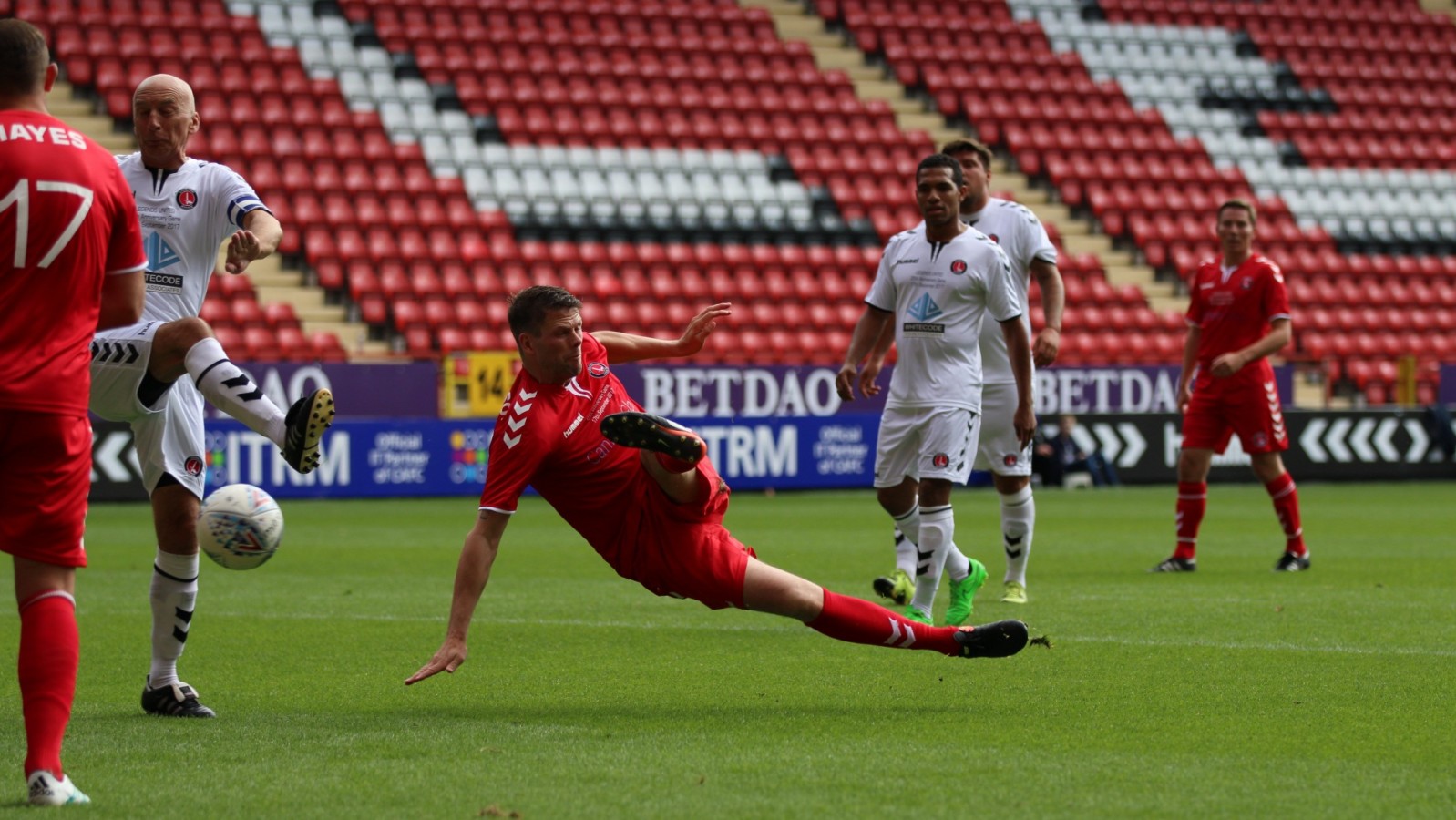 Keith Peacock’s XI triumphed in a penalty shoot-out after a 3-3 draw in the Legends United match at The Valley today.

Wearing red, Peacock’s team led 2-0 and 3-1, but were pegged back late on and had to earn victory from the spot.

Kevin Lisbie, starting up front, scored two first-half goals to put his team in control at the break. But a late comeback threatened to earn Dave Berry the win.

Bob Bolder was in goal for the Reds, with Chris Powell and John Humphrey at full-back. Jonathan Fortune partnered Hermann Hreiðarsson at centre-half.

Radostin Kishishev started on the right wing, but soon moved infield, and later filled in on the left, reminding fans of his versatility. Curbs joined Colin Walsh and Matt Holland in the middle of the park, with Lee Bowyer in the number 10 role.

Peacock encouraged his team to go forward at every opportunity, and they threatened several times throughout the first half.

An acrobatic effort from Hreiðarsson thundered off the post, the Icelandic international making several forays into the opposition’s penalty area, not just at set-pieces.

And at times it was evident that Lisbie was one of the few taking part who still plays semi-professionally. In the eighth minute, he played a one-two with Bowyer, rounded Kiely and slotted the ball home.

Down the other end, Nelson found Grant, who picked out Euell. The attacking midfielder played in Barness, who curled an effort just wide of goal.

Lisbie got in behind again on 15 minutes, but Kiely got down well to deny him.

Bowyer was excellent in midfield throughout, spraying passes out to both flanks and troubling Kiely from range. He also put in a number of crunching tackles, as did Gritt and Simon Webster. Lisbie’s pace posed the defensive pair problems at times, and he got his second goal as half-time approached, but they kept their team in the game with some perfectly-timed tackles.

At times, Grant appeared to have forgotten the offside rule. He was flagged three times within the opening 15 minutes and twice after half-time. But he kept going, holding the ball up and bringing others into the game, and eventually got his reward for flying all the way from Bangladesh to play.

On 52 minutes, a long-range effort from Kevin James beat Ilić to make it 2-1.

But the reds won a penalty midway through the second half as Lisbie, closing in on another Valley hat-trick, was tackled from behind as he ran towards goal.

The striker initially wanted to take it himself to secure the match ball, but, after much discussion, he let Powell step up and blaze it over the bar.

The red team did make it 3-1 soon after, though, as Bowyer played a one-two with Jamie Stuart and had his cross diverted into his own net by Steve Gritt.

Berry’s side weren’t finished yet though. Ilić made an excellent save from Scott McGleish. But he couldn’t stop Grant smashing home from close range from a Kevin James corner to make it 3-2.

And there was late drama as Mark Kinsella went down with three minutes to go and referee Wally James awarded a penalty. Some spectators thought the promotion-winning captain had gone down uncharacteristically easily, but the man in the middle not only pointed to the spot but gave Kishishev a yellow card for his challenge.

McGleish converted to level the scores and take the game to penalties.

Goalkeepers Ilić and Kiely were in great form throughout the shoot-out, with only four of the first nine takers – Nelson, McGleish, James and Peter Garland – scoring.

With the scores at 2-2, it was left to Clive Mendonca – who else? – to win the game for Peacock’s XI. And he did it, slotting it down the middle to be mobbed by his team-mates and the Charlton Upbeats.

It was a moving end to a sunny day in SE7, with thousands of pounds raised for Charlton Athletic Community Trust, and fans reunited with heroes from the last 25 years.

The final amount of money raised will be announced in the week, but you can still donate by visiting www.cact.org.uk/donate.

More images and video will be on the club website this week.