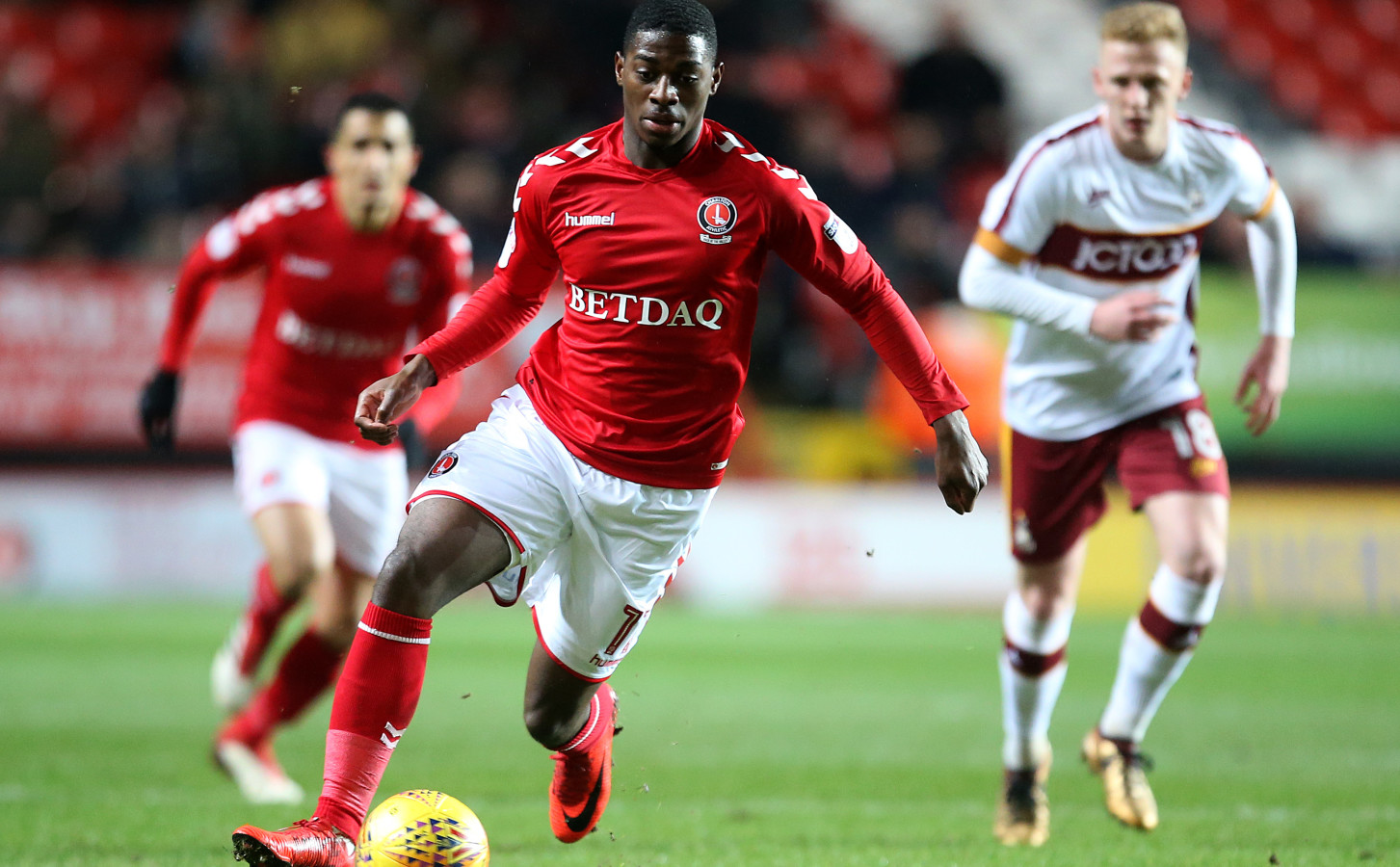 Despite some scintillating first half football Charlton came away with just a point from a tense 1-1 draw with promotion rivals Bradford City.

Josh Magennis gave the Addicks a 24th minute lead and while Charlton controlled much of the match, with 59% of possession, the Bantams grew into the game in the second half with substitute Tyrell Robinson nodding home the away side’s equaliser.

The result, though disappointing, leaves Charlton’s play-off hopes in their own hands, two points behind sixth-placed Bradford with two games in hand.

Karl Robinson made one change to the side that drew 1-1 with Doncaster Rovers on Saturday with Sullay Kaikai replacing Ben Reeves in the starting lineup.

The Addicks nearly took an early lead when Colin Doyle tipped a curling Mark Marshall effort onto the post in just the fourth minute. The winger used a run from Chris Solly on his outside to create space, cut inside on his left and sent a low curling effort towards the bottom corner of Doyle’s goal. The stopper was able to just get across and push onto his post and away from danger.

Magennis was next to trouble the goalkeeper with an eighth minute shot on the turn from a very tight angle following a quick Solly throw-in. This time Doyle was able to gather comfortably.

The Addicks continued and an 11th minute Jake Forster-Caskey corner caused problems in the Bradford defence, the ball came back to the midfielder whose deep cross was headed agonisingly across the face of goal by Kaikai.

Fosu was next to shoot at goal but his 15th minute effort from 25 yards went flying high and wide after he easily skipped away from his defender.

Bradford at the other end were seeing very little of the ball with tame, challenged headers from set pieces their only two sniffs at goal in the first 20 minutes.

In the 18th minute Doyle was called into action again blocking well with his legs after Kaikai struck the ball at goal from a neat Fosu pass.

The Addicks took a very much deserved 24th minute lead through Magennis. The Northern Ireland striker got up to head home a beautifully dinked cross from Marshall after a wonderful run on the break from Fosu. It wasn’t an easy finish for the striker who was under pressure from two Bradford defenders and the cross didn’t have a lot of pace on it making the perfectly placed header even more impressive.

Bradford continued to offer little in the first half with an Adam Chicksen shot from outside the area that cleared Ben Amos’ bar the closest they came and an impressive first period from the Addicks.

At half-time a fan won £1,500 for himself and his dad after hitting the crossbar in the Valley Gold Crossbar Challenge. Robin Leaford nominated his son Jack to take his shot and Jack’s perfectly weighted effort ensured he was the third winner of the half-time competition this season.

The Addicks nearly took an immediate second half lead when Marshall and Forster-Caskey linked up to find Fosu on the left wing. The former Reading man cut inside and his right-footed shot went just over Doyle’s bar.

Amos had his first real save of the game to make when a cross from the Bradford right was cleared only as far as Chicksen whose first time effort was blocked behind buy the Adidicks keeper. From the resulting corner Magennis cleared a Paul Taylor effort off the line to keep the home side’s lead intact.

Tony McMahon ran away celebrating thinking he had equalised in the 67th minute. His free from the edge of the D had Amos beaten but like Jack Leaford’s effort at half-time came back off the crossbar.

Fosu forced a 75th minute save from Doyle with a curling free kick from the left wing. The keeper was up to the task and touched behind for a corner. The resulting set piece was cleared as far as Kashi whose right-footed volley went wide.

Bradford equalised in the 80th minute when substitute Tyrell Robinson headed home a cross from the left from Charlie Wyke. Replays showed Chris Solly had the ball covered until an unfortunate deflection gave Robinson the advantaged allowing him to pounce.

Charlton nearly took the lead again immediately when a Marshall cross fell to Fosu in the box. The winger wasn’t quite able to keep his effort down.

Fosu then had a late free kick that sailed wide of Doyle’s post but it wasn’t to be for Charlton resulting in a second 1-1 draw in as many games.

Highlights for today's game will be available on Valley Pass from 12midnight. A matchday pass costs just £4 and gives you 48 hours access to our video and audio subscription service which includes live commentary, highlights, post-game reaction and access to the extensive Valley Pass archive. Click here to sign-up.