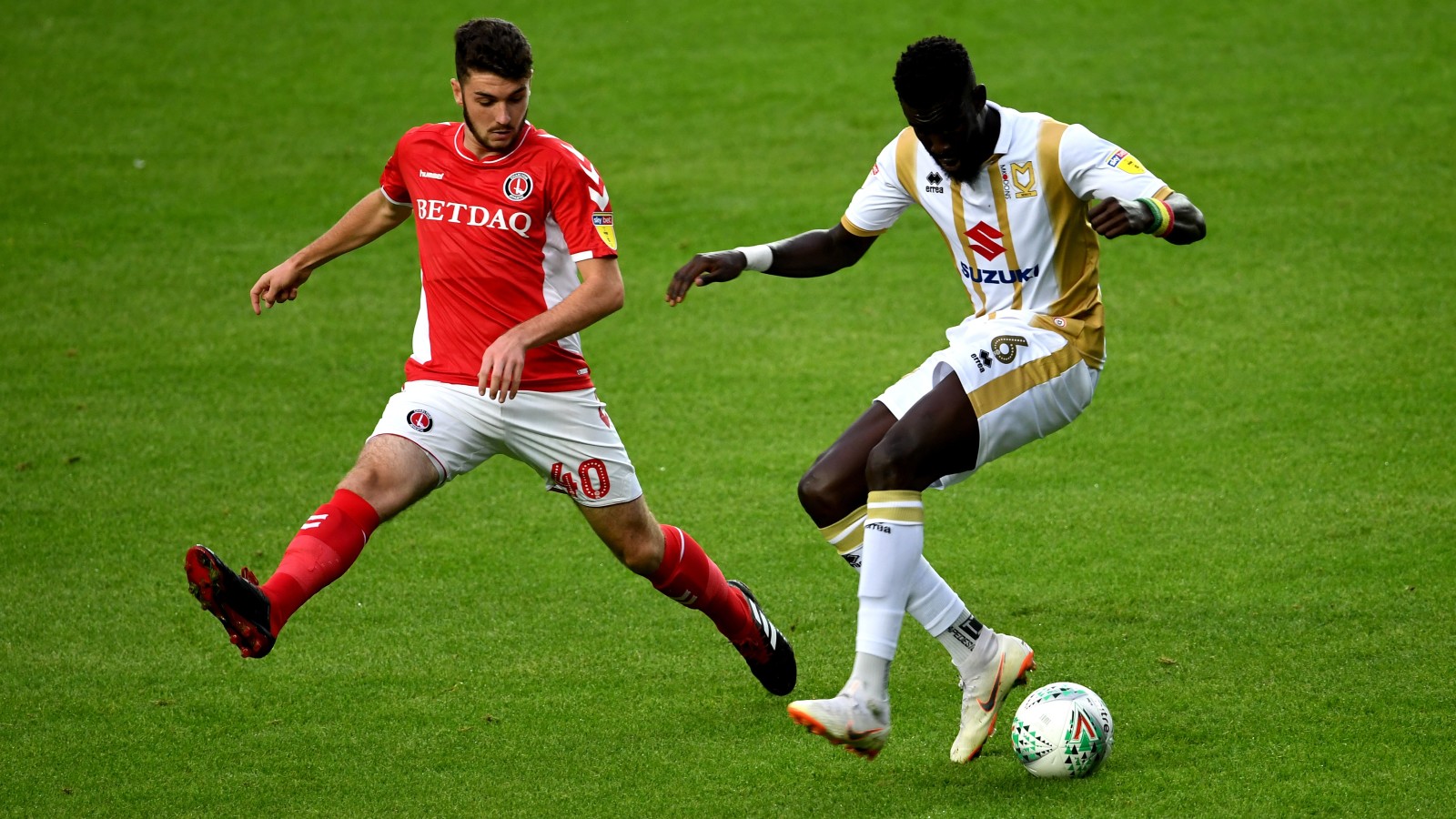 A very young Charlton side played some neat and tidy football but were ultimately well-beaten by MK Dons in the first round of the Carabao Cup.

MK struck twice in the first half, as Charlton didn't quite provide a real threat despite playing some decent football. The second half was much improved and the youngsters had a very good spell in which they were denied a clear penalty at 2-0.

With an eye on Saturday’s trip to Accrington three further debuts were handed to Brandon Sarpong-Wiredu, Alfie Doughty and Kenneth Yao, which allowed MK to take advantage while the trio adjusted to secure a rather fortuitous third goal.

With Johnnie Jackson and Jason Euell manning the touchline Charlton started in the same 3-5-2 formation that worked so well in the second half against Shrewsbury Town on Saturday. Dillon Phillips retained his place in goal and Mark Marshall started at right wing back, wearing the captain’s armband, but other than that there were nine changes for the travelling Addicks. Anfernee Dijksteel, Jo Cummings and Blumberg started at centre half. Marshall and Jamie Mascoll covered the wing back roles with a midfield trio of Albie Morgan, Taylor Maloney and Dempsey. Nicky Ajose and Reeco Hackett-Fairchild start up front.

Despite a promising start from the young Charlton team MK Dons took a ninth minute lead when talented youngster Dylan Asongayi pounced on a loose header back by Cummings.

It was 2-0 not long after when Ryan Watson collected and drove into space and curled a ball into the bottom corner with a sweet right-footed strike from quite a way outside the Charlton box.

The plucky Addicks weren’t giving up though and Dempsey had a shot blocked after a clever Dijksteel lay-off.

Morgan was next to trouble MK Dons with a powerful right-footed effort from 25 yards out but Lee Nicholls gathered comfortably.

The Addicks continued to shoot from range with Ajose, Morgan and Dempsey hitting efforts over in what was a very open first half but the away side were unable to close the gap and at the other end Ousseynou Cisse was causing the young Charlton defence no end of problems.

The second half begun as the first half had finished with half chances at either end, for Charlton Marshall looked most likely and won a corner after a stepover into a left-footed shot was blocked behind.

Hackett-Fairchild came as close as Charlton had been in the 57th minute when he collected a pass neatly and turned with speed to create a shot opening. His left-footed effort from just inside the box went just past Nicholls’ far post.

Charlton were starting to do more with the ball and just two minutes later an incisive Ajose pass found Hackett-Fairchild on the turn and his shot just inside the area was pushed behind by Nicholls.

Two minutes later the Addicks had what looked a clear penalty when Hackett-Fairchild and Ajose played a lovely one-two. The latter was bundled over by substitute Jordan Moore-Taylor but referee John Busby shook his head as the Charlton players, bench and fans appealed.

After a good spell, it was time for substitutes with Saturday’s league trip to Accrington Stanley in mind. Morgan, Marshall and Dijksteel made way for debutants Kenneth Yao, Alfie Doughty and Brendan Sarpong-Wiredu, as Charlton moved to a 4-4-2 diamond formation.

As the new youngsters looked to settle MK capitalised and added to their lead in the 71st minute with what looked like a Cummings' own goal after Callum Britain’s cross from the right hit looked to hit the defender and the woodwork before ending up in the back of the net.

Nicholls was called into action again immediately following the goal, palming a header over the bar from Sarpong-Wiredu.

Hackett-Fairchild had a cross/shot bounce off the crossbar in stoppage time but a surprise comeback wasn't to be for the away team.