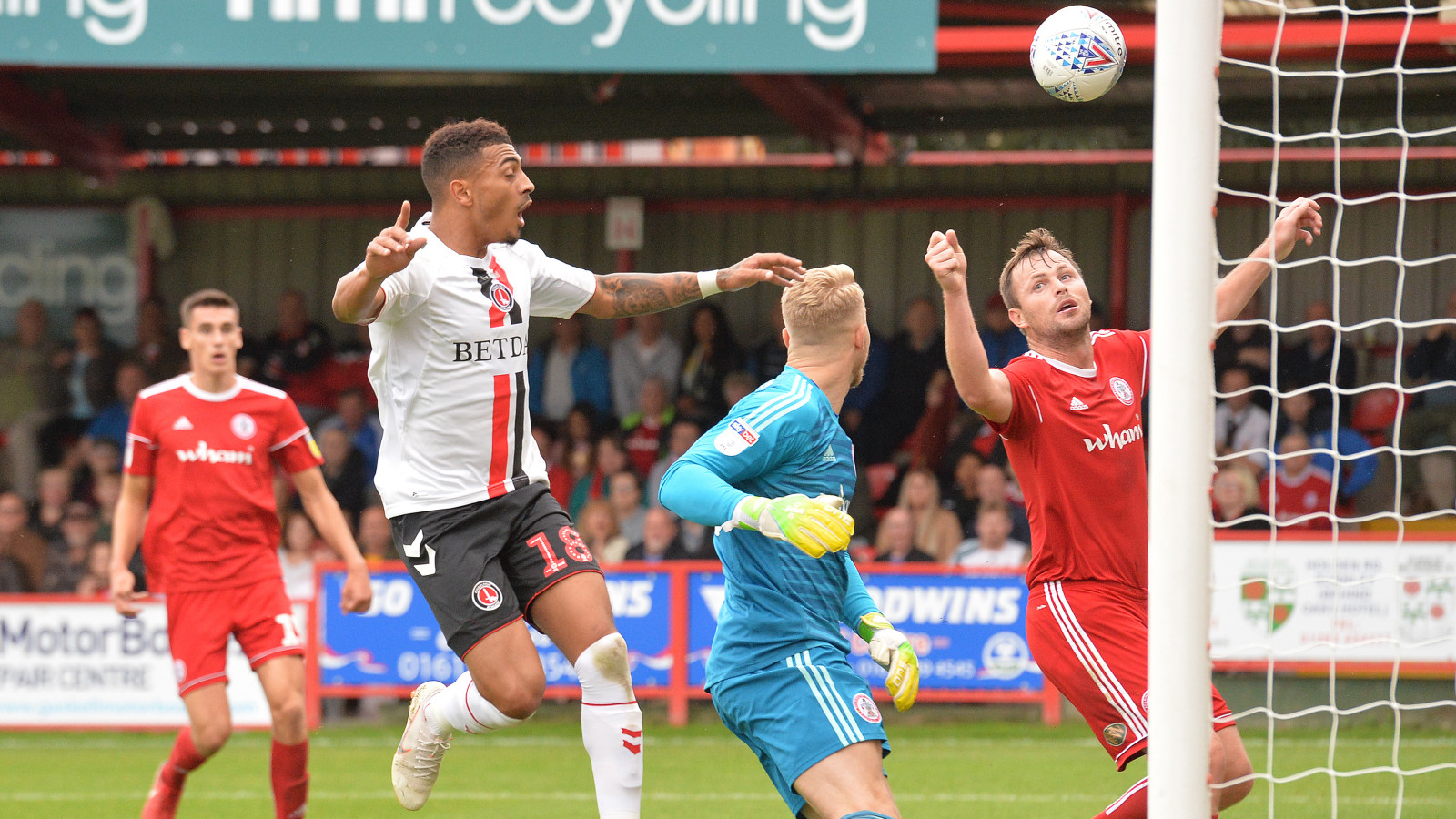 Charlton picked up a point on the road by drawing 1-1 at Accrington Stanley in Sky Bet League One on Saturday afternoon.

The Addicks had gone in front through a Karlan Grant header but, 12 minutes from time, they were pegged back by Jordan Clark’s close-range equaliser.

That ensured that the points were shared and Charlton will hope to return to winning ways on Tuesday night when they host Peterborough United at The Valley.

In terms of team news, Lee Bowyer made one change from the side that started the Addicks’ most recent league game, against Shrewsbury Town, last weekend.

New signing Krystian Bielik came in for Mark Marshall and that allowed skipper Chris Solly to switch to a more familiar wing-back role, with the Arsenal loanee slotting in at centre-back.

Darren Pratley and Callum Johnson aimed shots at goal for their respective sides inside the opening five minutes before, with seven minutes gone, Sam Finley sent an on-the-turn strike wide for Stanley.

It had been an open start to the game and it was the Addicks who grabbed the lead on the quarter-hour mark. Naby Sarr jinked away from his man on the half-way line and found Lewis Page on the left and he sent in a brilliant cross that Grant headed home.

Grant’s header bounced down off the underside of the crossbar and, although it did not hit the net, the linesman deemed it to have crossed the line.

That made it two in two for the academy graduate and he almost notched a second goal of the afternoon within two minutes. After Chris Solly had intercepted an Accrington attack, he found Grant, who drove forward and zipped a low strike just wide.

The Addicks were in control and they came close again with 25 minutes gone. Grant beat his man on the left flank and, after his cross was not cleared, Pratley sent the ball back into the box and Taylor just could not meet it in the middle.

Accrington worked themselves back into contention towards the end of the first half and they went close as the clock struck 45 when Billy Kee steered a Sean McConville cross narrowly wide with his head.

Lee Bowyer adjusted his team’s formation at the break, moving new-man Bielik into midfield, and they almost doubled their lead shortly after the restart. George Lapslie found the overlapping Page and his first-time shot was kept out by home stopper Connor Ripley.

Lyle Taylor stung the palms of Ripley with a left-footed drive on 50 minutes and five minutes late Joe Aribo headed wide from a Solly cross.

Pratley forced Ripley to tip his cross-shot over his crossbar on the hour mark and a couple of minutes later Grant shot wide, having scampered away from an Accrington challenge.

Charlton came so close to a second goal on 70 minutes. Lapslie drove forward and found Grant who, after sprinting clear of Mark Hughes, poked a shot against the outside of the post.

The Addicks had looked comfortable for most of the second period but Stanley levelled against the run of play with just over 10 minutes to go. After a close-range shot was well blocked inside box, the loose ball fell for Clark, who found the bottom corner.

Substitute Offrande Zanzala headed wide for the hosts, as they went in search of a winner, and at the other end Bauer nodded wide from a Marshall free-kick.

Five minutes of stoppage time were indicated and in the first of those Grant forced a corner off of Hughes. Accrington broke from it, though, and Phillips made a good save from a Clark shot.

The last kick of the game saw the Addicks awarded a free-kick 30 yards from goal. Grant stepped up and fired a strike inches wide, meaning that the game ended level.