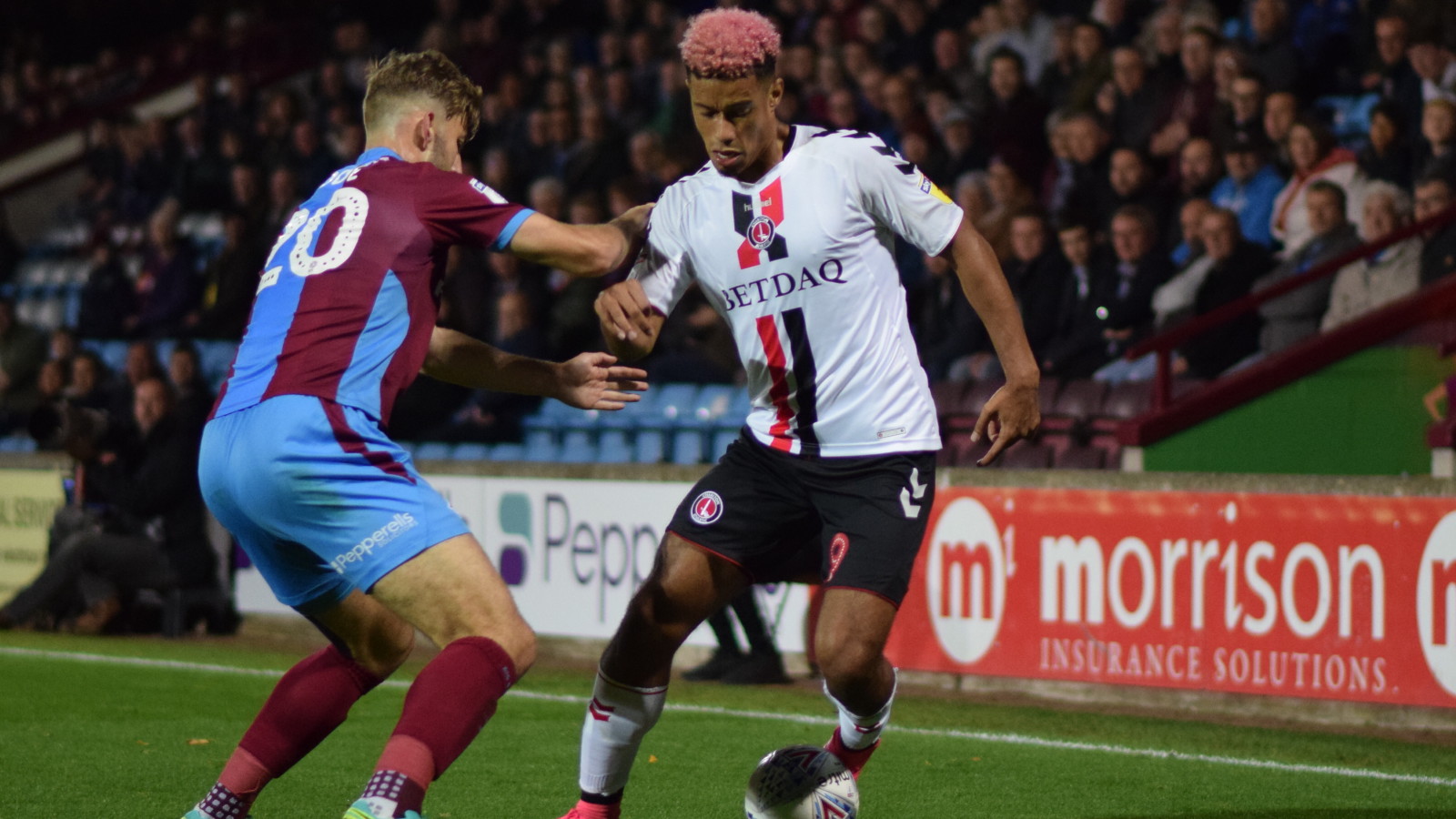 Charlton lost out in an eight-goal game against Scunthorpe United on Tuesday night to fall to their first defeat in seven Sky Bet League One matches.

First-half strikes from Lyle Taylor and Joe Aribo had cancelled out Charlie Goode’s early opener but The Iron would go on to lead at half-time after Cameron Borthwick-Jackson netted a double.

Aribo’s second of the night made it three apiece but the award of a very controversial penalty, which was scored by Josh Morris, and a Stephen Humphrys goal in stoppage time saw the hosts run out winners.

In terms of team news, Lee Bowyer made two changes from Saturday’s draw at Luton Town. Karlan Grant and Darren Pratley came into the team in place of Igor Vetokele and Ben Reeves, who both dropped to the bench.

The Addicks made the worst possible start as they fell behind inside three minutes. After a Ryan Colclough free-kick was deflected wide, the resulting corner was touched into the net at the near post by Goode.

It was an awful beginning for Charlton and things would get worse for them before the restart, with Lewis Page having to limp off with an injury.

Bowyer’s men, to their credit, quickly settled once play did get back underway and they came so close to levelling when Taylor sent a cross-shot inches wide of the far post from the left flank.

They probably should have equalised on 13 minutes. Taylor – sporting his new pink hair – sent a daisy-cutter goalwards that Jak Alnwick could only palm out as far as Grant but the Addicks forward could only steer the loose ball wide.

The miss would not matter though as, five minutes later, they did restore parity. Some great persistence from Tariqe Fosu won his side a corner and, when the flag-kick came into the box, Naby Sarr headed across for Taylor to score.

It was a fantastic moment for the former Scunthorpe striker, who is raising awareness for Cancer Research UK this month with his pink hair, and things would get even better for his side on 22 minutes.

Taylor himself picked up possession on the left flank and drove into the box before cutting the ball back for Aribo, who poked home from six yards out. It completed a great early turnaround from the Addicks and once again reinforced the strong team spirit within the squad.

The lead would not last, though, as Scunthorpe quickly levelled things up. A corner was headed out as far as Borthwick-Jackson and he fired an 18-yard strike into the net with his left foot.

The equaliser had come completely against the run of play and Charlton should have restored their lead on 34 minutes. Grant burst clear and, after entering the box, he put his defender on the floor with a brilliant drop of the shoulder. He could not beat Alnwick one-on-one, though, and given the chance again would almost certainly have squared to Aribo for a tap-in.

It proved costly as Scunthorpe then took the lead for the second time on the night. Humphrys found Borthwick-Jackson in space and he arrowed a low strike into the corner of the net for his second goal.

The Iron led at the interval and they created the first chance of the second period when Humphrys shot tamely into the arms of Addicks stopper Jed Steer.

At the other end, the Addicks had a good chance to net their third of the night and equalise on 54 minutes. A Ben Reeves corner was only cleared as far as Cullen, who squared to Fosu and he fired over the bar with his right foot.

They came close again a couple of minutes later when Grant was freed on the right flank but his low cross was just out of the reach of his strike partner Taylor.

The second period was not matching the first, in terms of tempo, but the chances were still coming Charlton’s way. They were so close to equalising on 64 minutes. Taylor switched the play to Fosu on the left and he made himself half a yard before smacking the ball against the inside of the post.

On 68 minutes, their equaliser did arrive. A quick free-kick saw the ball land at the feet of Taylor and he laid off Aribo to notch his second of the game. It was a deserved leveller but, as the crazy nature of the game continued, Scunthorpe retook the lead almost immediately.

It would come in controversial circumstances, though, as Jason Pearce was penalised for hand-ball inside the box. The ball clearly struck the arm of the defender but he was standing centimetres from where the cross came in from, giving him no chance of getting his arm out of the way.

The linesman on the far side did not flag for a penalty but referee Darren Drysdale pointed to the spot. Morris converted the spot-kick from 12 yards.

At the other end, it looked as if Charlton should have had a penalty of their own with seven minutes to play when Dijksteel was dumped to the deck but, incredibly, the referee dismissed the appeals.

Scunthorpe netted a fifth in stoppage time to make the result safe. A low cross came in from the right and Humphrys tapped home from close range to condemn the Addicks to their first defeat in seven.