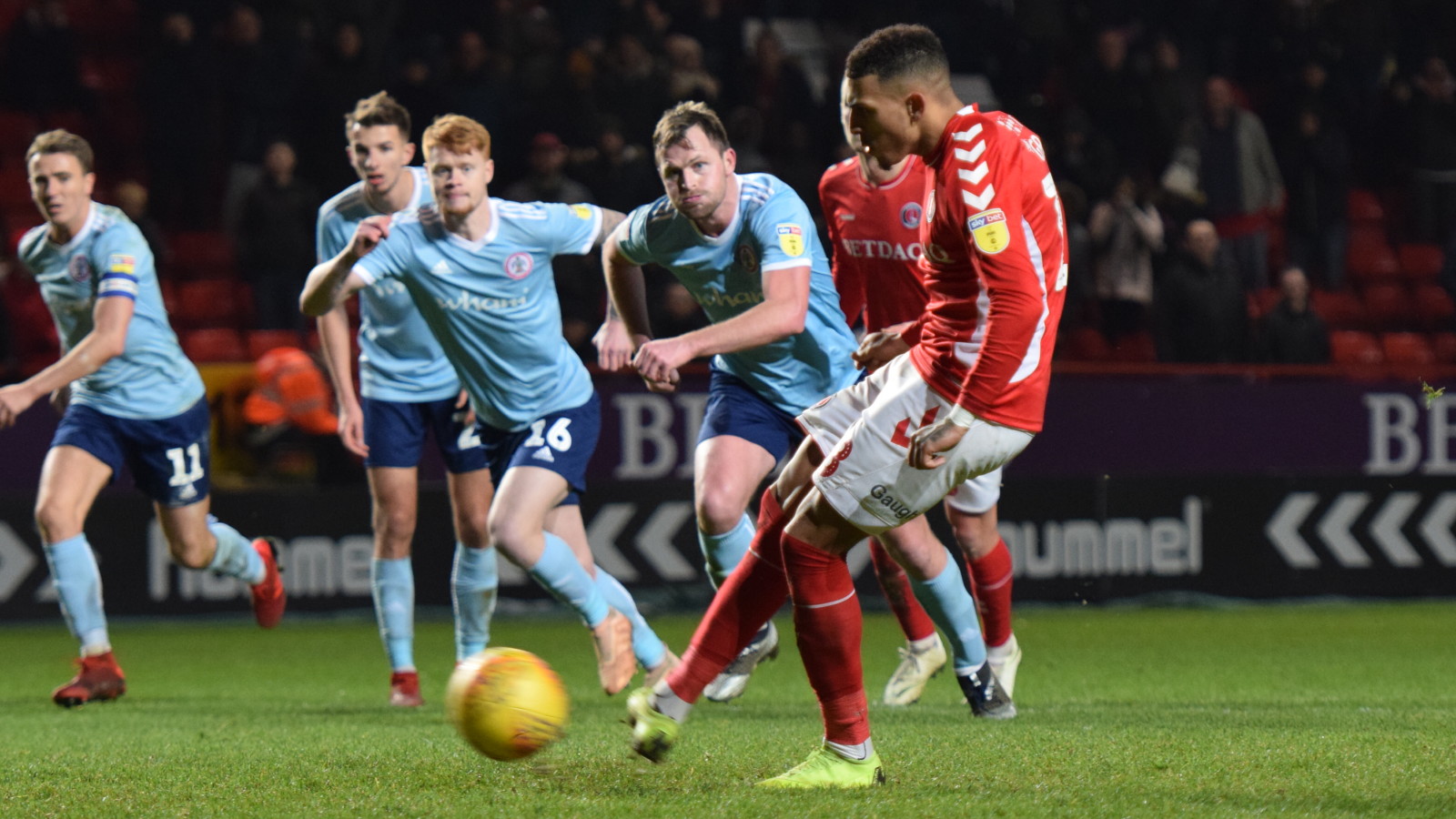 Karlan Grant’s stoppage-time penalty fired Charlton to a dramatic three points against Accrington Stanley in Sky Bet League One at The Valley on Saturday.

In an ill-tempered game, the striker fired home his 14th goal of the season with 94 minutes on the clock to secure the Addicks’ tenth home league victory of 2018/19.

It looked as if Charlton were going to be frustrated by their aggressive visitors, especially when Lyle Taylor and Accies goalkeeper Jonny Maxted were sent off for their part in a mass brawl.

But Grant’s penalty – which was awarded following a handball in the box – rewarded the south-east Londoner’s persistence and sets them up nicely for their trip to promotion-rivals Peterborough United next weekend.

In terms of team news, Lee Bowyer made one adjustment to the side that won so impressively at Shrewsbury Town last weekend.

Josh Cullen – back fit following a dislocated shoulder – came in for Albie Morgan, who picked up an injury in training during the week, and the Addicks were otherwise unchanged.

The first two strikes of the game were Accrington’s, with efforts from Billy Kee and Sean McConville both flying harmlessly off target, and it was Charlton who then created the first real chance on 12 minutes.

Jonny Williams fed Taylor on the right and he drilled in a low cross that looked destined to be tapped home, only for it to fizz right across the face of goal.

Addick goalkeeper Dillon Phillips made a routine save from a Kee header on the half-hour mark and three-minutes later a dangerous Grant cross was almost turned into his own net by Accrington defender Mark Hughes.

Accrington had a great chance to break the deadlock on 40 minutes. Kee headed a right-wing cross into the path of his strike-partner Luke Armstrong but he couldn’t beat Phillips from six yards out. The stopper spread himself bravely and made a superb save.

Moments later, Darren Pratley shot wide for the Addicks from 18 yards and that was the final sight of goal in a half of few clear-cut chances.

Visiting stopper Maxted claimed a low Taylor cross five minutes into the second half and the goalkeeper then saved from the Addicks forward when he let fly with a left-footed strike.

Maxted excelled himself on 58 minutes. Ben Purrington headed at goal from a deep Grant cross and the goalkeeper flung himself to his left to claw his effort away.

Phillips made a good save to keep out Kee’s corner-bound header at the other end and Charlton’s Taylor then flicked an inviting Purrington cross wide of the target with 69 minutes gone.

The Addicks were beginning to turn the screw and, on 74 minutes, Taylor had a strike deflected behind before, two minutes later, Grant sent a left-footed drive inches wide of the post.

Charlton finally looked to have made the breakthrough 10 minutes from time. Reeves whipped in a corner that Bielik powerfully headed home, only for the referee to rule it out for a foul.

The decision was immediately followed by a huge scuffle between both sets of players, which resulted in referee John Busby showing red cards to both Maxted and Taylor.

That made it 10-aside for the final eight minutes of the 90. Five minutes of stoppage time were then indicated and three minutes into it, the Addicks would get their winner. Ben Reeves, who had made a huge impact after coming off the bench, aimed at goal and his shot was blocked by the hand of an Accrington defender.

Initially, it looked as if referee Busby was going to wave away the huge appeals of ‘handball’ from everyone in red but after a few seconds he eventually pointed to the spot.

Accrington’s players charged over the linesman in front of the East Stand to appeal the decision, very aggressively, but the officials had made their minds up.

Grant put the ball on the spot and, like he did at Shrewsbury last weekend, he made no mistake from the spot to fire the Addicks to a huge, huge three points in their quest for promotion.

Sent off: Taylor 82 (altercation with Taylor)

Sent off: Maxted 82 (altercation with Taylor)