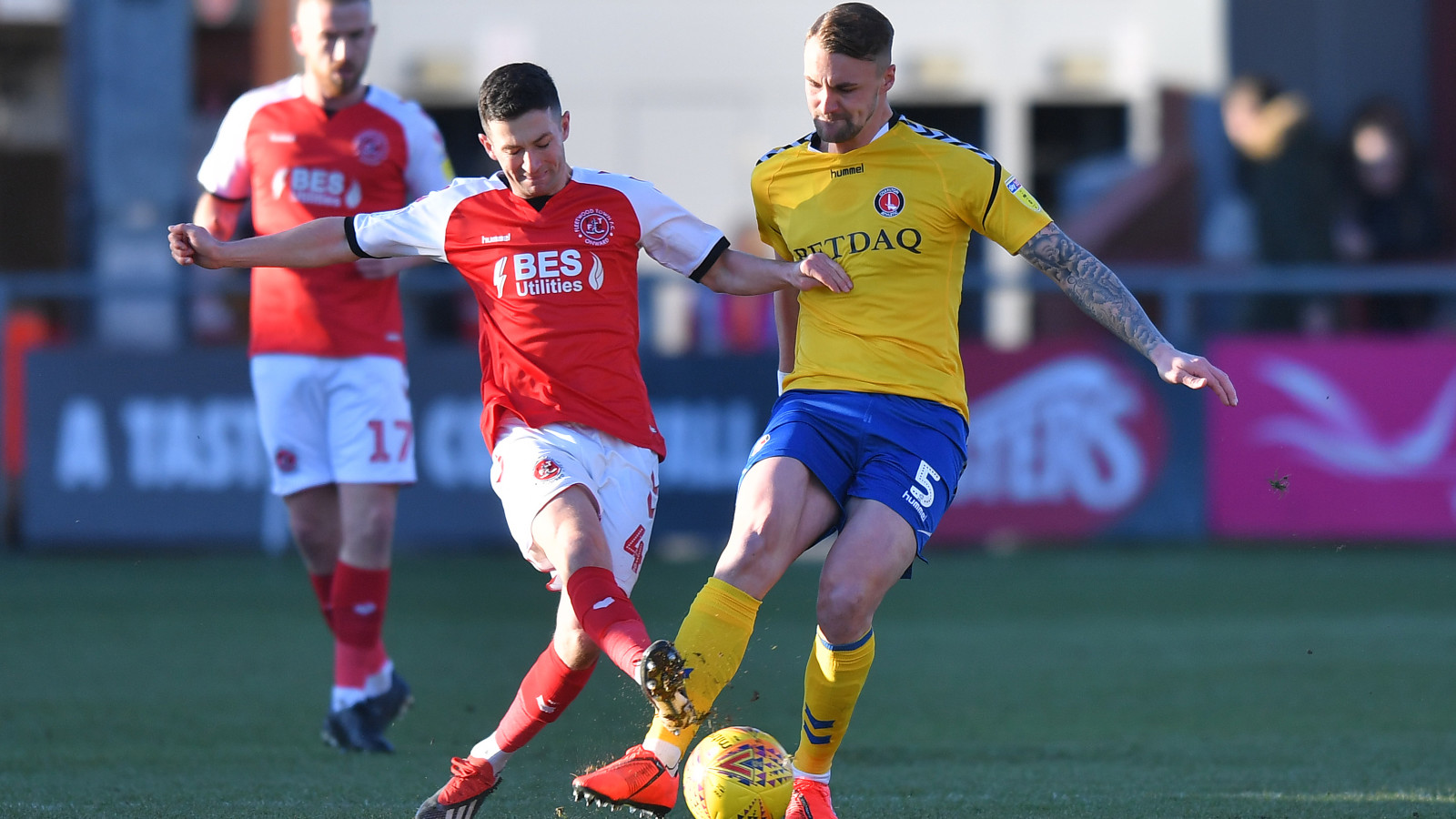 Charlton’s unbeaten start to 2019 came to an end on Saturday afternoon as they fell to a one-goal defeat at Fleetwood Town in Sky Bet League One.

The Addicks had the better of the first half, with Jonny Williams going closest, but Ched Evans’ 69th-minute goal settled the game for the hosts after the break.

The result leaves the Addicks – who ended the match with 10 men following Patrick Bauer’s late red card – inside the play-off places and they will hope to bounce back when they host Southend United next weekend.

In terms of team news, Lee Bowyer made two changes to the side that started last weekend’s goalless draw at Peterborough United.

Reeco Hackett-Fairchild came in for Karlan Grant – who left the club during the week – while George Lapslie replaced Darren Pratley in midfield.

It took eight minutes for the opening shot of the game to arrive and, when it did, it was Charlton’s. Following a foul on Jonny Williams on the edge of the box, Ben Reeves saw a free-kick deflected over the crossbar.

The resulting corner flew out for a Fleetwood goal-kick and a couple of minutes later the Addicks won themselves another flag-kick. This time, Josh Cullen played in a low cross towards Reeves but the midfielder missed his kick and the chance went away.

Corners were proving to be Charlton’s early source of chances. On 21 minutes they came close when Reeves’ delivery was headed out as far as Cullen, who saw his first-time volley well blocked by a man in red.

Charlton could have broken the deadlock with 25 minutes on the clock. Cullen broke into the box and sent in a low cross that Ben Purring tried to steer home with his body from close range. A Fleetwood man scrambled it clear but the loose ball came out as far as Williams and he aimed a strike at goal that home stopper Alex Cairns parried to safety.

Paddy Madden saw a strike well blocked by Chris Solly on 37 minutes, in what was a rare foray forward from the hosts, and the Fleetwood striker then headed over top from a Ross Wallace cross 60 seconds later.

Charlton had had the better of the first half but the two sides went in goalless at the break. Two minutes into the second period, Evans stung the palms of Dillon Phillips with a low free-kick that the goalkeeper did well to save.

Bowyer introduced Josh Parker for his Addicks debut on 54 minutes and four minutes later his strike-partner Hackett-Fairchild thumped a 20-yard shot wide of the Fleetwood goal.

Charlton goalkeeper Phillips made an important save on 62 minutes. Evans broke through one-on-one, after Krystian Bielik had been dispossessed, but the striker could not beat the stopper, who made himself big to save his shot.

The reprieve was only brief, however, as the hosts took the lead seven minutes later. Madden headed a diagonal pass into the path of Evans and this time he made no mistake with his finish.

Debutant Parker almost gave his side an immediate equaliser on 72 minutes when he broke down the left flank but his cross-shot just evaded the outstretched leg of Hackett-Fairchild in the middle.

A long Naby Sarr throw caused confusion in the Fleetwood box seven minutes from time, with Bauer eventually seeing a shot well blocked, and the hosts then should have doubled their lead but Evans could not find the empty net, following a mix up between Chris Solly and Phillips.

Charlton were reduced to 10 men on 88 minutes when Bauer picked up a second yellow card for a foul on striker Evans and they were given seven minutes of stoppage time to try and find an equaliser.

Two minutes into the added-on period, substitute Tariqe Fosu thumped a shot over the top and that was as close as they came as Fleetwood held on to win.