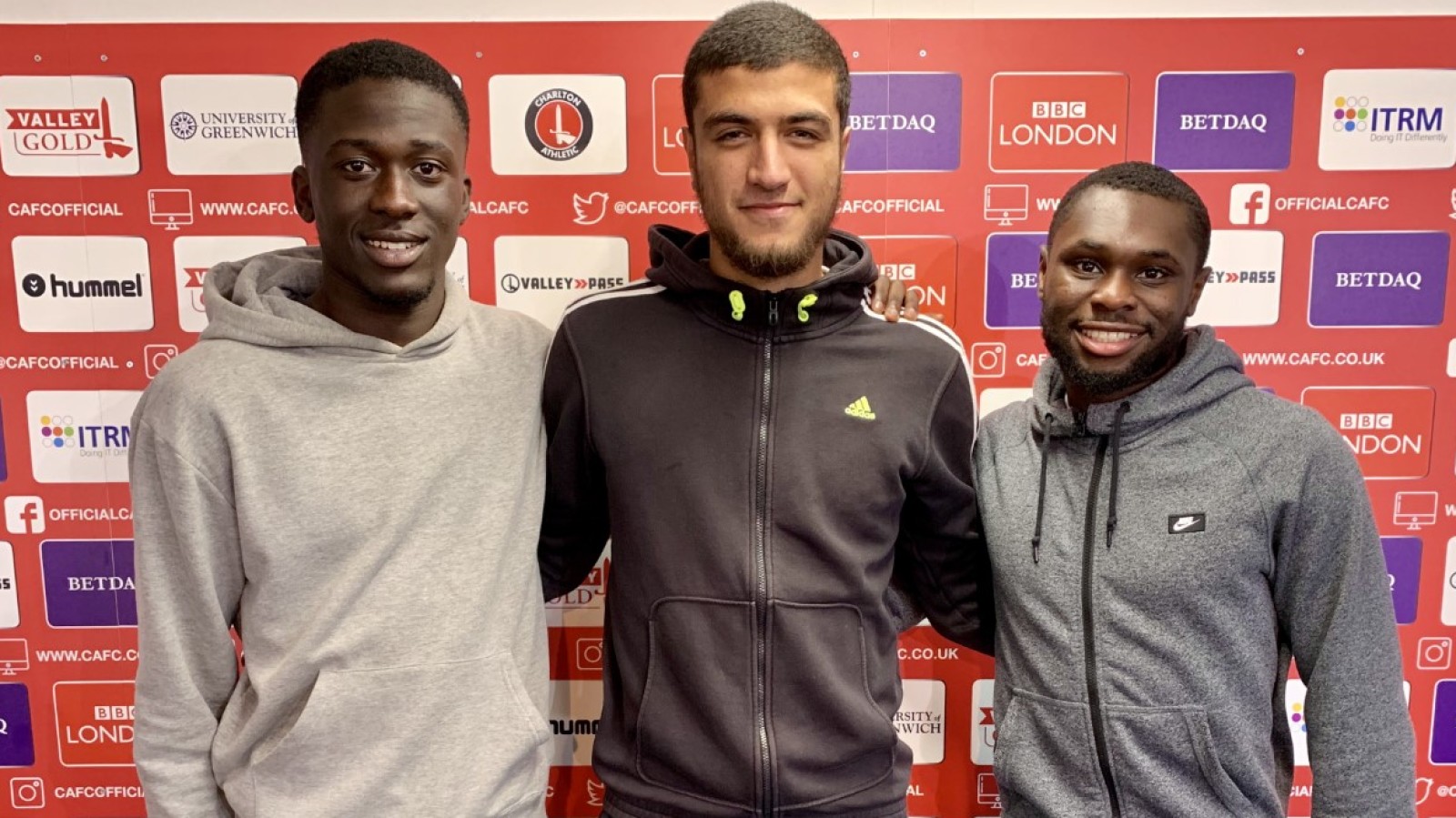 Kenneth Yao, Wassim Aouachria and Brendan Sarpong-Wiredu have all signed contract extensions with the club.

20-year-old Kenneth Yao, who signs until 2020, said of his contract extension: “I’m very pleased to have a new deal, this will be my 11th season at the club so I’ll be hoping to push into the first team now and hopefully get a few chances!”.

Forward Wassim Aouachria, also signing until 2020, spoke about his new deal and the transition from life in France to England.

“It’s really good, it’s a great town (London). It’s a change from France but I’m really happy here and that is the most important thing. I think that Hamza (Serrar) helped me of course but I would like to thank Steve Avory and Jason Euell because they all made the decision.”

Brendan Sarpong-Wiredu, who will remain at Charlton until 2021, spent part of this season on loan at Bromley in the National League and will be hoping to build on his experiences starting with his contract extension at Charlton

“I want to kick on now and hopefully get into the team next season. Hopefully even in the next few weeks I can start to make a claim in training! I’d like to thank everyone at Bromley as well for giving me the chances to play at that level, I’ve come back a lot more mature and hopefully at the start of pre-season I’ll come back fit. It’s a big step up from U23s football. You want to be playing men’s football because the game is much faster and when you come back here, you’re more able to adapt to first team football. I think as a footballer going out on loan is a big step for me.”

Yao and Aouachria are both looking ahead to their futures and potential loan deals to get some valuable experience under their belts.

Yao said: “I had a loan earlier on this season with Dartford which lasted a month and a half which was very good so next season I just have to see what happens and take it from there.”

Aouachria also has his sights on playing men’s football and is waiting to see what will happen next season in terms of his development.

Academy manager Steve Avory gave his insights on the trio.

On Kenneth Yao: "Of the three players that have just signed extended deals, Kenneth is the longest serving.

"He’s been with the academy since U11, he is one of the products of the Harris academy. He came through schooling there which enabled him to have that extra bit of contact time, which helped him.

"What is sometimes forgotten about defenders is that first and foremost they are defenders and have to defend. I can say that Kenneth is a good defender and a good one-on-one defender. He’s got the qualities that have once again rewarded him with another extension to his time here at Charlton.

"What I would hope is that over the course of the next season, that the management will become even more aware of him and that Kenneth will impress with his performances. He’s converted from more of a central defender, where he played a lot of his academy football, to a right back since starting with the U23s. He’s a very versatile defender. But whatever the position he’s got very good defensive qualities."

On Brendan Sarpong-Wiredu: "Brendan is another long serving academy graduate who again came through the Harris link. He has very good physical attributes, he’s always had those.

"What he’s done this season, particularly in the second half of the season is add consistency to his game. We decided a couple of months ago to see how he would do with a loan experience in senior football and he went to the highest level of senior football outside of the football league, playing at Bromley. So, that was always going to be a big challenge for him. But having watched him myself as well as the other coaching staff, he’s impressed at Bromley. So much so that Neil Smith would gladly have him around next season if he’s available. But first and foremost, he’s got come here pre-season having proven that he’s looked after himself throughout the club season and get the ball rolling again.

"I think what the academy players have seen is, if you go back to last season, that players like Albie Morgan and Alfie Doughty were part of that initial squad of Lee Bowyer’s. Some of those young players had that opportunity and grabbed that, which is what Brendon will look to do."

On Wasim Aouchria: "With Wasim it was an unexpected one. To get a French player in when we’re certainly not going to be spending any money, through connections we had with the U23s coach.

"This player was released by Marseille, we had a look at him initially in a trial period and he impressed. We’ve been on the look-out all season and continue to be looking for forward players, particularly central attacking players.

"He’s a little bit more than just a centre forward. He can play anywhere across the front-line, he can play as a number ten, but with his height and physical attributes, he’s got enough pace to get in behind opponents. He’s a good technical player as well, I think by his own admission he’s had to adapt to the English game and is still adapting to the work ethic of the game. The physical demands of the game. But what I like about him as well is that he’s got a solid personality. He takes on-board the pieces of constructive criticism; he wants to work hard at his game. I like what I see from him in training every day. I feel he genuinely loves the game.

"It’s good when you see a player appreciating the opportunity. I think he felt that as though his young career was going backwards in France. He felt as if there wasn’t much of a caring environment surrounding him, which could tend to him when he was on the verge of being released.

"This opportunity came about in England and I think he’s grasped it so far. He recognises it’s just that; an opportunity. An opportunity to play in another country, but I know he loves the English game and is impressed by what he sees. He wanted to try and prove himself."

The club can also confirm that it has taken the option to extend both Ashley Maynard-Brewer and Toby Stevenson's contracts by a further year.