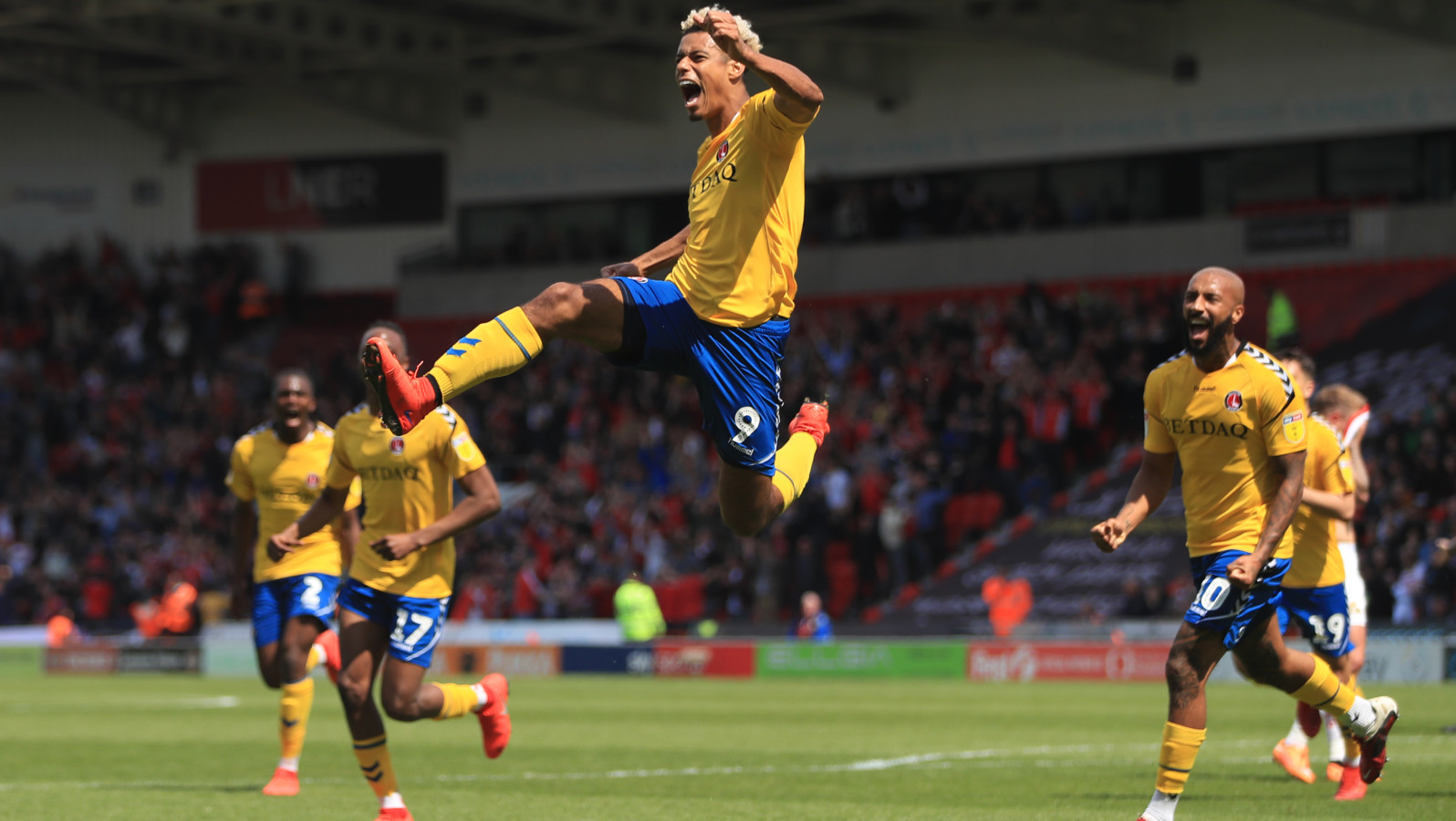 Charlton will take a one-goal lead into Friday’s play-off semi-final second leg against Doncaster Rovers after putting in a brilliant performance at the Keepmoat Stadium on Sunday lunch time.

Goals from Lyle Taylor and Joe Aribo had the Addicks two up after 34 minutes of the first leg and after the break they defended excellently to stay in front in the match.

A late, deflected cross – which was tapped home by Matty Blair on the goal-line – halved the deficit for Rovers but Charlton were full value for their victory.

The overall winner of the tie will, of course, contest the play-off final against either Sunderland or Portsmouth at Wembley Stadium and the last few tickets for Friday’s semi-final are still on sale.

In terms of team news, Lee Bowyer started with the same side that thrashed Rochdale in last weekend’s final-day clash at The Valley.

There was an alteration in shape, however, as they lined up in a 3-5-2 formation. Krystian Bielik, Patrick Bauer and Naby Sarr made up a back three and they were flanked on either side by Ben Purrington and Anfernee Dijksteel.

The first chance of the game fell the way of the latter. Parker wrestled his way beyond Donny skipper Andy Butler and poked the ball into the net, only for the strike to be ruled out for a foul on the defender.

James Coppinger then dragged a shot wide for the hosts, in what was their first effort of the game, and that was all either side had to show for their efforts in the first quarter of an hour.

Charlton – who had been bossing possession – came close on 18 minutes. Taylor saw a shot well blocked by Paul Downing and, after the loose ball fell for Aribo, the midfielder also had a strike charged down.

Parker came so close to breaking the deadlock three minutes later. Purrington curled a cross into the box and the forward steered a header just wide of the target.

The Addicks were well in the ascendency and a good team move on 23 minutes ended with a low Taylor cross deflecting into the arm of home goalkeeper Marko Marosi.

At the other end, Dillon Phillips made good save from Coppinger, diving to his left to push his shot behind for a corner, and full-back Danny Andrew then thumped a long-range free-kick against the top of the crossbar.

Chances were now beginning to drop at both ends and next it was Charlton’s turn to go close. After possession bounced off of Rovers defender Butler, the ball fell for Taylor and his snapshot was brilliantly saved by Marosi.

The Charlton striker did not have to wait much longer to get his goal, though. After a Cullen corner was not cleared, Morgan sent the ball back into the box and it landed back at the feet of Cullen. He whipped in another low ball and Taylor was there to bundle it home with his head.

The home fans screamed for offside against Cullen, who had picked possession back up on the byline, but the midfielder was clearly in an onside position when Morgan’s cross came into the box. And although Morgan’s ball deflected into the path of Cullen, it came off a Doncaster man, keeping him onside.

The goal sent the packed away end absolutely wild and they barely had time to catch their breath before they were celebrating again.

The Addicks worked the ball to Taylor inside the box and he fed it to the overlapping Aribo, who fired home from a tight angle.

The roof almost came off the Keepmoat as the Charlton team, bench and away end all went crazy and they almost got a third goal before half-time but Morgan’s powerful drive was well tipped over by Marosi.

The Addicks held a two-goal lead at the break and just before the hour mark Donny full-back Andrew had a free-kick deflected wide of the target.

Charlton had managed the beginning of the second period perfectly and on 73 minutes they came close to scoring a third goal. Aribo led a counter attack and found Taylor on the left and he crossed for Cullen, who forced Marosi to save his header.

Taylor was millimetres away from connecting with an Aribo cross five minutes from time, as the Addicks went in search of goal number three, and moments later Doncaster pulled one back.

Malik Wilks got to the byline and sent in a cross that deflected into the air and Blair was there to turn the ball home from under the crossbar.

The goal sparked the home crowd into life but the host were unable to create another chance and the Addicks held on to win.