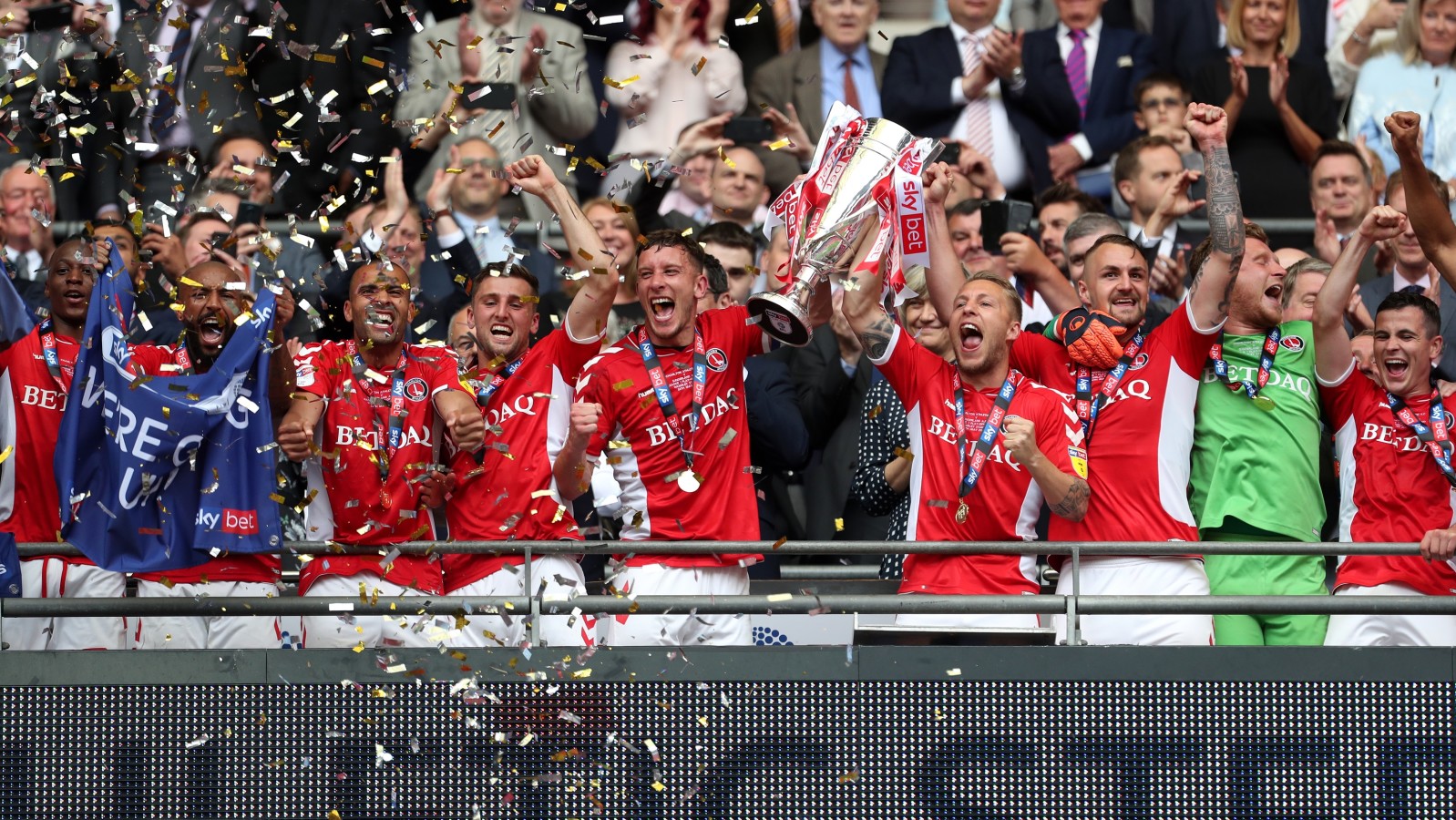 Patrick Bauer scored a last-gasp winner in the Sky Bet League One play-off final on Sunday to fire Charlton back to the Championship.

The goal, which was bundled in from close range, came in the dying seconds of the closely-fought match against Sunderland.

The Black Cats had taken an early lead at the national stadium when a Naby Sarr back pass rolled under the foot of Dillon Phillips and trickled into the net, before Ben Purrington levelled matters on 35 minutes with his first Charlton goal.

The equaliser was more-than deserved for the Addicks, who had been the better side, and after the break they edged proceedings without creating too many chances.

It looked like extra time would be required to decide the winner but Bauer popped up with seconds remaining to net the winner and send 38,000 passionate Addicks mad.

After the game, Lee Bowyer gave an emotional speech in the dressing room where he thanked his players for making him proud and also paid credit to those loyal fans who have supported their team so brilliantly all season.

We are going up.

In terms of team news, Bowyer made one change to the side that started last Friday’s semi-final second leg against Doncaster Rovers at The Valley.

Darren Pratley – who bagged the Addicks’ crucial extra-time equaliser against Rovers – came in to replace Albie Morgan. Fit-again Ben Reeves took his place amongst the substitutes, with Morgan missing out, and the squad was otherwise unchanged.

Charlton started on the front foot, with Lyle Taylor and Purrington both sending crosses into the box inside the first minute but the first chance would be Sunderland’s. Chris Maguire volleyed at goal from a tight angle and Phillips was there to make an easy save.

In the fifth minute, the Black Cats grabbed the lead. The goal came in disastrous circumstances. Sarr, on the edge of his own box, passes possession back to goalkeeper Phillips and the ball rolled under his foot and trickled into the empty net.

It was the worst possible start for Bowyer’s boys but, despite that, the 38,000 Addicks in attendance all rallied around their team by raising the noise levels in the west side of Wembley.

Phillips made a good save from a powerful Grant Leadbitter strike on 11 minutes and the Addicks then began to settle into the game.

Bauer headed over the crossbar from a Josh Cullen corner with 24 minutes on the clock and three minutes later Lyle Taylor thumped a strike wide, having been found by a raking Purrington pass.

Charlton were now on top and they netted a deserved equaliser on 35 minutes. Some superb play on the right flank between Aribo, Dijksteel and Taylor ended with the latter firing in a low cross that was bundled home by full-back Purrington.

It was the defender’s first Addicks goal – first in senior football – and it arrived at the perfect time, as it sent the Valley-turned-Wembley faithful into raptures.

The scores remained level until half-time and before the second period kicked off Bowyer made his first change of the game, replacing Sarr with Jason Pearce.

Switch number two arrived 20 minutes from time, with Jonny Williams coming on in place of Pratley, and the former Sunderland man instantly got himself involved by running at the Black Cats’ defence.

Chances were proving few and far between in the second half and four additional minutes were indicated at the end of the 90. In the third of those, Cullen sent a free-kick into the box that Bauer met but couldn’t direct on target.

There would be one more chance for Charlton, though. They made it count… and some. The ball was worked into the box and it landed at the feet of Bauer, who steered it home via a deflection. The noise was deafening and the whole Addicks bench sprinted down the touch line to celebrate the goal that would ultimately send us back to the second tier.